Many England fans viewed the Champions Trophy, a tournament featuring the world's top eight ODI sides, as a distraction from the rather more important business of a third straight Test campaign win over Australia when they face their arch-rivals in a five-match series starting in Nottingham next month. 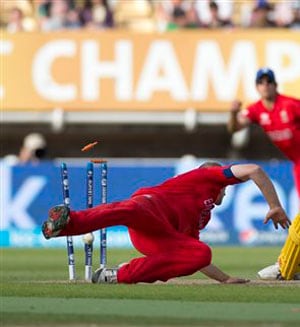 England moved a step closer to ending a trophy drought in One-Day Internationals with a ten-run win over New Zealand in Cardiff on Sunday (June 16), progressing to the semifinals in the ongoing Champions Trophy. And James Tredwell, the offspinner, reckoned that winning the title would be an "absolutely massive" achievement.

Tredwell, 31, has become a symbol of England's growing strength in the 50-over game in that he often gets his chance only when Graeme Swann, England's premier offspinner across all formats, is injured.

However, because of Tredwell's consistency, it is no longer a surprise to see him performing well at the international level. He has filled in admirably for Swann in three of England's last four ODIs - all victories compared to the seven-wicket loss to Sri Lanka in Group A.

Many England fans viewed the Champions Trophy, a tournament featuring the world's top eight ODI sides, as a distraction from the rather more important business of a third straight Test campaign win over Australia when they face their arch-rivals in a five-match series starting in Nottingham next month.

But Tredwell was in no doubt that winning the Champions Trophy would be a significant success in its own right.

"We have as a good chance now (of winning this tournament) as any team in the next stage. That's an absolutely massive thing," said Tredwell. "We don't want to look too far ahead - to lifting that trophy, we hope - but equally, it's something that's in the back of your mind.

"The semifinal is going to be tough, but we're two games away now from winning a major tournament."

Swann is currently sidelined with calf and back problems but Alastair Cook, the England captain, showed confidence in Tredwell and stressed on Sunday that there was no need to rush Swann back.

"I'm in the squad and I'm getting a game here and there," said Tredwell. "I don't think I've let anyone down in the games I've played, so I hope that can continue. For my part it's fingers crossed, isn't it?

"But again Swanny's been brilliant, hasn't he, for a period of time. So if he's fit, I'm sure he'll come into the reckoning - as they say."

"I've got a few games under my belt and shown what I can do. When every game comes around now, I'm chomping at the bit to get on the park," added Tredwell.

England are generally reluctant to field two specialist spinners in the same side, with Tredwell and Swann appearing together just three times, all in the subcontinent - at the World Cup in 2011 and during the Test tour of Bangladesh in 2010.

"We've played together before and I don't see any reason why we can't again," said Tredwell. "We are very different, I think; we offer different things in a game scenario, so at some stage we might get a game together."

Despite nearly four decades of trying, England are yet to win an International Cricket Council ODI event. Graham Gooch, now the team's batting coach, appeared as a player in England's three losing World Cup finals - in 1979, 1987 and 1992 - while the last time the Champions Trophy was held in England in 2004, a side led by Michael Vaughan lost a dramatic final against West Indies at The Oval.

England's only major title in cricket's shorter formats is the 2010 World Twenty20 they won in the Caribbean.

Comments
Topics mentioned in this article
ICC Champions Trophy 2013 Cricket Andrew Strauss Graeme Swann Eoin Morgan James Tredwell
Get the latest updates on ICC Women's Cricket World Cup 2022 and IPL 2022, check out the Schedule , Live Score and IPL Points Table. Like us on Facebook or follow us on Twitter for more sports updates. You can also download the NDTV Cricket app for Android or iOS.