Sri Lanka, led by Dinesh Chandimal, will have to overcome rustiness after most of their recent matches at home against New Zealand were ruined by rain. 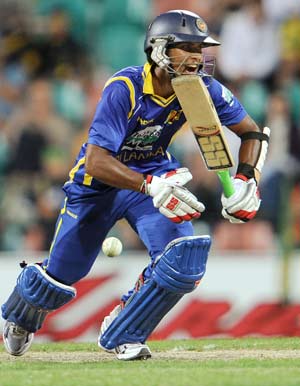 Sri Lanka and Pakistan will use their two-match series in Dubai starting on Wednesday to size each other up ahead of the World Twenty20 in three months' time.

Pakistan, fourth in the Twenty20 rankings, are also aiming to topple Sri Lanka from the top of the standings by winning both matches, the second of which takes place on Friday.

"Sri Lanka are a top side so this is in itself a motivation to beat the number one side and if we win both it will lift us to the top of the world," Pakistan captain Mohammad Hafeez said.

If the series is a 1-1 draw the teams will maintain their current rankings while a 2-0 loss would push Hafeez's team down to fifth.

They also overcame tough resistance from minnows Afghanistan by six wickets in a last ball thriller in Sharjah on Sunday - the first Twenty20 between the two countries.

Pakistan will be at full strength and boosted by the return of magician off-spinner Saeed Ajmal, who skipped Sunday's game to rest back home.

Sri Lanka, led by Dinesh Chandimal, will have to overcome rustiness after most of their recent matches at home were ruined by rain.

Last month they beat New Zealand 1-0 with the other match abandoned because of inclement weather.

"The advantage Pakistan's got is that they have played a lot of international cricket in the last six-eight months whereas unfortunately we haven't played nearly as much because of weather and various other things," said coach Graham Ford.

Sri Lanka are hoping their batting will see them through with the experienced Tillakaratne Dilshan and Kumar Sangakkara providing a contrast to Pakistan's fragile and unpredictable batsmen.

Ajantha Mendis and Sachithra Senanayake are the two specialist spinners in the bowling department which is spearheaded by paceman Lasith Malinga.

Pakistan finished runners-up in the first World Twenty20 held in South Africa in 2007 before winning the title in England two years later.

Pakistan defeated Sri Lanka in the final at Lord's -- a defeat which Sri Lanka avenged by winning the semi-final in Colombo on their way to finishing runners-up in the fourth edition last year.

The fifth edition of the T20 World Cup will be held in Bangladesh from March 16 to April 6.

Comments
Topics mentioned in this article
Cricket Pakistan Cricket Team Sri Lanka Cricket Team Mohammad Hafeez Dinesh Chandimal ICC Champions Trophy 2013
Get the latest updates on SA vs IND 2021-22, check out the Schedule and Live Score . Like us on Facebook or follow us on Twitter for more sports updates. You can also download the NDTV Cricket app for Android or iOS.