The TTCB said on Sunday that its decision to impose a ban on Vijay Outim is to send a strong message that hooliganism in any form would not be tolerated. 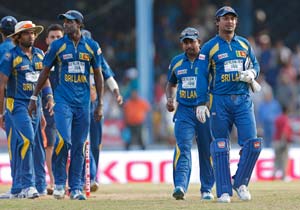 The Trinidad and Tobago Cricket Board (TTCB) has imposed a five-year ban on a spectator who threw a half-filled bottle on the field during the final of the Celkon Mobile Cup between India and Sri Lanka at the Queen's Park Oval on Thursday.

Vijay Outim pleaded guilty to the charge of throwing missiles in a public event and was placed on a TT $1,000 (One TT dollar = US$0.15 cents) bond to keep the peace for one year and in default of which he will serve two weeks in prison with hard labour.

The TTCB said on Sunday that its decision to impose a ban on Outim is to send a strong message that hooliganism in any form would not be tolerated.

Consequently, Outim is banned from attending any regional or international cricket held in the twin-island Republic under the auspices of the TTCB.

Outim threw a partially filled plastic bottle onto the field of play, striking Sri Lanka player Lasith Malinga. He attempted to flee the scene but was held by security officers who handed him over the police at the grounds. The incident also resulted in a brief halt in play.

The five-year ban imposed by the TTCB is believed to be the first disciplinary action taken on any spectator at international cricket in the Caribbean.

The TTCB said that a picture of Outim would be circulated to security personnel at all TTCB events to prevent him from entering for the next five years.