MS Dhoni finished on 45 not out from 52 balls as India chased down their target of 202 with two balls to spare and 1 wicket to spare. 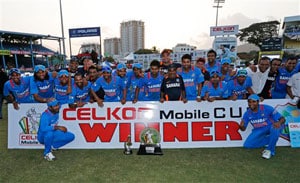 India captain Mahendra Singh Dhoni dragged his side to a pulsating one-wicket victory over Sri Lanka in the final of the Tri-Nation Series at Queen's Park Oval on Thursday. (Scorecard)

Returning to the team after seeming to be ruled out from the rest of the tournament with a hamstring injury eleven days ago, the inspirational wicketkeeper-batsman smashed 16 runs off three deliveries in the final over, bowled by Shaminda Eranga, to take the tournament favourites to 203 for nine in reply to Sri Lanka's 201 all out off 48.5 overs.

Less than three weeks after lifting the Champions Trophy to add to the World Cup title of 2011, Dhoni held a rapidly imploding innings together in compiling an unbeaten 45, carting the hapless Eranga for a six, a four and then a six off successive deliveries. (Highlights)

"I thought I could target the bowler in that last over because he's not as experienced as some of the others," said the India captain.

"I didn't want to take any chances against someone like a (Lasith) Malinga or a (Angelo) Mathews. I think I'm just blessed with good cricketing sense."

Last-man Ishant Sharma was only required to survive at the other end and managed to achieve just that, although there were a few anxious moments between his arrival at the crease at 182 for nine and when the captain took responsibility to win the match on his own in the final over. (Match in pics)

India were actually cruising along at 139 for three in the 32nd over in the best weather of the tournament.

But the dismissal of Suresh Raina triggered a collapse which saw four wickets falling for 13 runs, left-arm spinner Rangana Herath turning the screws with two wickets in two balls to finish with the best figures of four for 20. 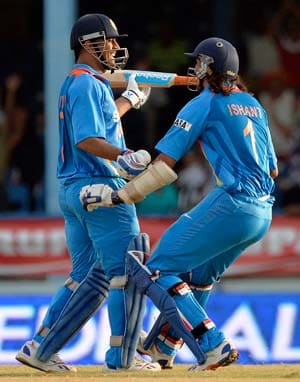 Sri Lanka endured an even more calamitous collapse after they were put in at the start of the day, losing their last eight wickets for 30 runs after at one stage being promisingly poised at 171 for two in the 38th over.

A 122-run second-wicket partnership between Kumar Sangakkara (71) and Lahiru Thirimanne (46) had placed their side in that excellent position.

However a succession of injudicious shots saw batsman after batsman gifting his wicket away.

Dhoni marshalled his forces superbly while effecting three stumpings and playing his part in strangling the opposition when they would have been expected to be flourishing and racing towards a formidable total.

Ravindra Jadeja benefited most from the rash of indiscretions, claiming four for 23 with his left-arm spin.

"We kept taking wrong options because if we had batted properly we would have gotten 230-240," said a rueful Sri Lanka captain Mathews in reflecting on another opportunity for silverware lost.

"I'm really proud of the boys with the way we fought in defence of a small total though."

Sangakkara's wicket was key to India wresting the initiative from their very familiar opponents for he played with assurance and excellent awareness until the urgency of the batting power-play triggered the risky stroke that brought about his demise to a good catch at mid-on by Vinay Kumar.

Kumar's namesake, Bhuvneshwar, made the early strikes for India on a bright, humid morning with the wickets of openers Upul Tharanga and Mahela Jayawardene, the former captain falling for 22 in his 400th One-Day International.