Mahendra Singh Dhoni, who led India to a thrilling one-wicket win over Sri Lanka to lift the tri-series trophy, says his excellent finishing skills have a lot to do with the good cricketing sense. 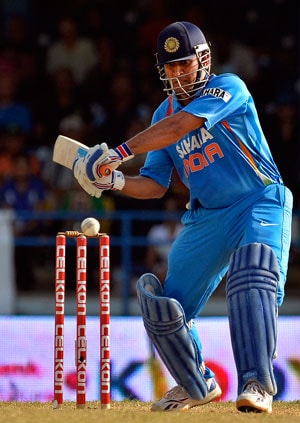 He has made a habit of coming good when the chips are down and Indian captain Mahendra Singh Dhoni feels his excellent finishing skills have a lot to do with the good cricketing sense he is "blessed" with. (Scorecard)

Dhoni's 52-ball 45 proved to be decisive as India lifted the ODI tri-nation series trophy after beating Sri Lanka by one wicket in a thrilling final.

"I think I am blessed with a bit of good cricketing sense. I knew I could get 15 runs off the last over, I'm happy that it worked," said the beaming captain, who returned to the team after recuperating from the hamstring injury which kept him out for most part of the series. (Match report)

Dhoni said he preferred to use a heavy bat in the final over of the title clash against Sri Lanka as it was "perfect for slogging".

Of the 45 unbeaten runs that Dhoni scored, 16 came in the last over during India's chase of 202. (Highlights)

"I went with a heavy bat, the weight was perfect for slogging," the Man of the Match said at the presentation ceremony.

After bowling out Sri Lanka for 201, India rode on Dhoni and Rohit Sharma's half century to chase down the target with two balls to spare at the Queen's Park Oval.

"15 players have been very good on the field and that is a good sign," he added. (Stats)

"The opposition bowler (Shaminda Eranga) was not the most experienced in that last over unlike (Lasith) Malinga, so I thought I would take my chances."

Dhoni and Virat Kohli, who led the team in three matches in Dhoni's absence, jointly accepted the winners trophy after the presenter had forgotten about it. (Pics)

Player of the series was Bhuvneshwar Kumar while Rohit Sharma was awarded the Most Trusted Player of the Series.

Sharma said: "I am really happy with the way we performed. The wicket was not easy to play shots, I wanted to delay my shots and wanted to stay as long as possible in the middle.

Regarding the Indian captain's knock, the Mumbaikar said, "We have seen Dhoni doing it over and over again, so it was not so much of a surprise."

Sri Lanka skipper Angelo Mathews was full of praise for his bowlers.

"It was a great game, the bowlers showed a lot of character to defend 200. Sanga and Thirimanne batted really well, but we lost momentum after that. Had we played till the end, we could have pushed it to 230-240 and that would have been enough.

"Herath bowled really well to bring us back into the game, but Dhoni is always a dangerous batsman. We played a good tournament throughout, didn't win the title, but the players showed a lot of character," Mathews said.