Seamer-friendly conditions in England will assist my bowling: Bhuvneshwar Kumar

Kumar said that he will stick to the basics and would not look to experiment too much with his pace and variation. 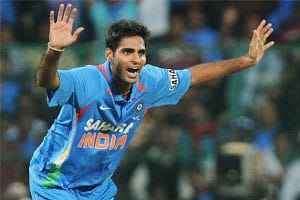 Picked in the Indian squad for the upcoming Champions Trophy, Bhuvneshwar Kumar is confident of making the opportunity count and says the seamer-friendly conditions in England and Wales will "assist" his style of bowling.

Kumar was yesterday included in the 15-member squad for the 50-over tournament, to be held from June 6 to 23.

"I am feeling very happy for my selection. I am confident of doing well there as the conditions will assist my style of pace bowling," Kumar told PTI here.

The selectors opted for five seamers, and the list included the name of the 22-year-old Uttar Pradesh player.

Kumar said he will stick to the basics and would not look to experiment too much with his pace and variation.

"I wanted to be a part of this team. I will stick to my basics, just try to bowl within my limits. I won't experiment much with my pace and variation," he said.

Kumar, who is playing for Pune Warriors in the ongoing Indian Premier League, said the team would look to win its next five games in the tournament.

Warriors are lying at the bottom of the points table with just two wins from 11 matches.

"We are virtually out of the play-off race, efforts would be to win our next five games, which will help boost our morale. There were patches when we haven't performed well but that's part and parcel of the game. Some teams perform well, some don't," he said.

Comments
Topics mentioned in this article
Cricket ICC Champions Trophy 2013 Bhuvneshwar Kumar Pune Warriors India
Get the latest updates on ICC T20 Worldcup 2022 and CWG 2022 check out the Schedule, Live Score and Medals Tally. Like us on Facebook or follow us on Twitter for more sports updates. You can also download the NDTV Cricket app for Android or iOS.