Lee, who is representing Kolkata Knight Riders in the ongoing Pepsi IPL, was all praise for Tendulkar. He also backed his home country and India to do well in the upcoming ICC Champions Trophy in the United Kingdom. 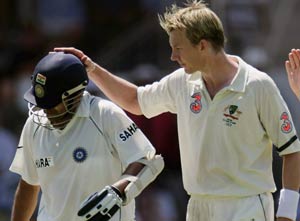 "There is a lot of media saying he should move on, he should stand down. (But) I believe if he keeps scoring runs and he keeps batting well, then he should be able to go (out) on his own terms. I think it is only fair," Lee said.

"If a guy has played for over 20 years of international cricket, he deserves the right to play his 200th Test match. Hopefully, he does get his 200th Test match, because I can't see it ever being achieved again," the Aussie said at the Staeta Soy Milky event here on Monday.

Tendulkar, who has retired from one-day cricket but is active in the traditional five-day format and the IPL T20 tournament for Mumbai Indians, has played 198 Tests since his debut in 1989.

The 40-year old cricketer, however, will have to wait till the end of this year to play his next Test, when India are scheduled to tour South Africa from November.

Lee, who is representing Kolkata Knight Riders in the ongoing Pepsi IPL, was all praise for Tendulkar.

"He is a legend. He is a little master with all due respect with 198 Test matches to his credit. He is the most prolific run scorer in the world... I am not trying to say one (Don Bradman and Sachin Tendulkar) is better than the other, but he certainly is right up there. He has been a hero of mine while growing up."

"He is like a good bottle of red wine that keeps getting better with age. He is a wonderful guy, a great role model around the world. He is loved in Australia. I would love to see him play more but it is upto the great man to say when he wants to hang his boots up," Lee said.

Lee, who formed a lethal combination with his senior partner Glenn McGrath during Australia's long domination of world cricket, backed his home country and India to do well in the upcoming ICC Champions Trophy in the United Kingdom.

"Australia, if they do back themselves up. I would never bet against Australia. I still think they are a great side. India would be very tough to beat too," he said.

"We obviously enjoyed playing Champions Trophy. It's a tournament that everyone looks forward to. It's a prestigious tournament and it's one that you do want to be a part of and also want to try and win it. We had some success in the past," he said.

But he also feared for the future of the 50-over limited overs game and said it was dying a slow death with the increasing popularity of the all-out-action T20 cricket.

"Unfortunately the one other format of the game that is slipping away is the 50-over cricket which I feel sad about because I always enjoyed playing 50-over cricket. It's a lot different from T20 because it's a bit more strategic.

"I do hope for world cricket that 50-over cricket isn't lost. It appears that it is dying its slow death, obviously being taken over by T20 cricket and I want to make sure Test cricket is very healthy as well," he said.

Lee conceded that the 4-0 drubbing by India over Australia in the last Test series held here before the IPL would have undermined his countrymen's confidence a bit ahead of the Ashes battle in England after the Champions Trophy.

"I would be lying if I said it wouldn't affect their confidence leading upto that series, the Ashes. Australia will have to do a lot of work before they go to England. I would never bet against Australia. If they hit the right team, the right set-up, right structure in place then they can be successful," he said.

Lee termed Ashes and the battle against India as Australia's biggest in the Test cricket these days.

"You have got to give full credit to India, their preparation is outstanding. The way they play from team point of view is sound," he said.

He also backed compatriot and Mumbai Indians' left-arm pace spearhead Mitchell Johnson, ignored by the Australian selectors for the Ashes series, to regain his spot in his country's team in the near future.

"It looks like he has been in the best form of his life right now and certainly in T20 cricket - the way he is bowling for Mumbai Indians. He is swinging the ball back in.

"When Mitchell Johnson swings the ball back in, it is really healthy for Australian cricket. He will be disappointed (for leaving out for Champions Trophy) , but I am sure he will be back in no time."

Johnson broke the back of Chennai Super Kings's innings with a brilliant early three-wicket burst in yesterday's IPL game here and won the man of the match award.

Comments
Topics mentioned in this article
Cricket ICC Champions Trophy 2013 England Cricket Team Australia Cricket Team Sachin Ramesh Tendulkar Brett Lee Mitchell Johnson Donald George Bradman
Get the latest updates on India vs South Africa and check out  Schedule, Results and Live Score. Like us on Facebook or follow us on Twitter for more sports updates. You can also download the NDTV Cricket app for Android or iOS.