South Africa is in Group B alongside world champions India, current ICC World Twenty20 holders West Indies and Pakistan, all good sides according to the South Africa skipper. 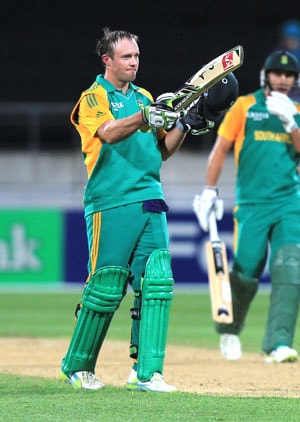 South Africa will have to make a strong start against India in their opening match of the upcoming ICC Champions Trophy if it wants to lay its hands on a piece of ICC silverware, a feat the country has not achieved since 1998, Protea captain A B de Villiers said.

De Villiers feels that the upcoming ICC Champions Trophy is a golden opportunity for South Africa to shed its tag of perennial chokers in big tournaments.

"We are really looking forward to the ICC Champions Trophy in England and Wales. This is another opportunity for us to win that elusive ICC trophy and it will be a great test for our ODI squad looking ahead to the World Cup in two years," de Villiers said.

"I personally think every opponent in our group is a threat. Our recent 3-2 win over Pakistan only highlighted the threat they (Pakistan) can pose in the limited-overs format, and India and West Indies can both be destructive if they arrive on the day. We are going to have to start strong in our opening match against India at the Cardiff Wales Stadium and hopefully use the momentum for the extra advantage through the group stages," he said.

"Our performances (in ICC events) have not been a true reflection of the talent and skill that we possess, and this year we will be out to change that. We will always have this monkey on our back until we win the competition so hopefully this time around we will be able to overcome the pressure."

The Pretoria-born wicketkeeper-batsman, who has 5,542 ODI runs to his name to date, singled-out some key players, including players from not only his own side, for special praise.

"The nature of ODI cricket is such that any player can take the game away on the day. I think looking specifically at our group, Chris Gayle is one of the major players that stands out, as well as Mahendra Singh Dhoni who is a master-class with the bat," he said.

"I think the one element that has worked in our favour has been our process of focusing on ourselves. We have some big game-changers in Dale Steyn and Hashim Amla, and some exciting youngsters who are brimming with potential. JP Duminy will also make a comeback after a long absence and I'm looking forward to having him back," de Villiers said.

"We have some quality cricketers in our current ODI squad. I think if we can collectively take the confidence and momentum we gained during our series win over Pakistan, any player in our squad can win the game for us on the day. We have a balanced makeup of experience and youth in our squad. I think that will be to our advantage in the competition," he added.

South Africa is in Group B alongside world champions India, current ICC World Twenty20 holders West Indies and Pakistan, all good sides according to the South Africa skipper.

"They are all quality cricket sides and they have some key players who can win the game on the day. We've played India and Pakistan in the past couple of years and both the series went down to the last match. That's a key indication of the depth and talent of the sides in our group. It's going to be a challenge that we are definitely up for," de Villiers said.

Speaking about the importance of the tournament ahead of the upcoming ICC Cricket World Cup in in 2015, the 29-year-old said: "It's crucially important; it makes it so much more exciting because of the strength versus strength setup of the competition. It's a good measuring stick for the competing teams to rate where they are, especially looking ahead to the World Cup in two years.

"I'm looking forward to it, it's my first 50-over competition as captain and I have a stern belief that this time around we can change our fortunes."

The ICC Champions Trophy will be held in England from June 6 to June 23.