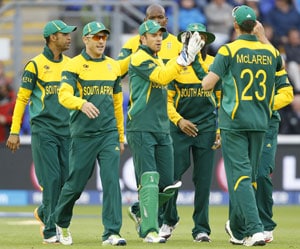 South Africa advanced into the semi-finals of the Champions Trophy on superior net run-rate after their rain-marred match against the West Indies in Cardiff on Friday ended in a tie.

The West Indies, who had to win this match to go through to the last four, were exactly level on the Duckworth/Lewis system for rain-affected matches at 190 for six off 26.1 overs when Australian umpires Rod Tucker and Steve Davis decided the rain was too heavy to continue and took the players off the field for the final time at 7.43pm local time (1843 GMT).

Crucially, shortly before play was abandoned, with West Indies then ahead of their D/L target, Kieron Pollard was caught for 28 by Dale Steyn at third man off Ryan McLaren and his exit swung the match back to parity.

The Proteas joined already-qualified India as one of the two semi-finalists from Group B.

For South Africa, often dubbed 'chokers' for throwing away promising positions, this result was in marked contrast to their 1999 World Cup semi-final tie with Australia at Edgbaston, which saw them go out following a pool loss to the Aussies, and their exit from the 2003 World Cup on home soil when a failure to correctly interpret the D/L sheet saw them tie with Sri Lanka, rather than win, in Durban.

Comments
Topics mentioned in this article
Cricket ICC Champions Trophy 2013 Dale Steyn Sreesanth Tino Best Dwayne Bravo Ramnaresh Sarwan Aaron Phangiso Kemar Roach
Get the latest updates on India vs Australia Series, check out the India vs Australia Schedule for 2020-21 and Ind vs Aus live score . Like us on Facebook or follow us on Twitter for more sports updates. You can also download the NDTV Cricket app for Android or iOS.