It's the weak-kneed legacy that AB de Villiers and his side will have to cope with when they go into The Oval semifinal against England on Wednesday (June 19). Since 1992, they have played two World Cup semifinals and four in the Champions Trophy. They won it when it was played for the first time, as the ICC Knockout, in 1998. In 2000, 2002 and 2006, they made their exit at the last-four stage. 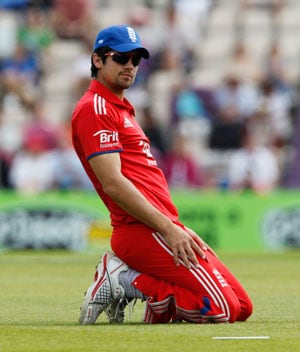 Think of South Africa in a World Cup semifinal in England, and the mind immediately goes back to Edgbaston 1999 and the headless chicken run-out that resulted in a tie and Australia going through to the final. Think of a semifinal against England and you go back even further, to the Sydney Cricket Ground in 1992, when the scoreboard let people know that the joke of a rain rule had reduced the match to a farce. (SA's chokers tag will have no bearing on the semi-final outcome: Alastair Cook)

Both matches are mentioned often enough to cite South Africa's horrible luck at big-ticket events. Except that luck had nothing to do with either. On both occasions, they deserved their fate, for being as soft as lemon meringues. The rain rule may have ruined the Sydney contest, but England had been denied five overs at the end of their innings because South Africa's over-rate was so appalling. Sympathy? Only if you have a warped sense of right and wrong.

At Edgbaston, Lance Klusener struck fours off the first two balls of the final over to reduce the equation to one needed from four balls. He had the strike as well. In such a situation, you'd expect even Papua New Guinea to scramble a single and get over the line. South Africa couldn't. Not strong enough. Move on.

It's this weak-kneed legacy that AB de Villiers and his side will have to cope with when they go into The Oval semifinal against England on Wednesday (June 19). Since 1992, they have played two World Cup semifinals and four in the Champions Trophy. They won it when it was played for the first time, as the ICC Knockout, in 1998. In 2000, 2002 and 2006, they made their exit at the last-four stage. ("Winning Champions Trophy would be 'massive'")

Look at sport's wider landscape, and South Africa have become cricket's answer to New Zealand rugby (1991-2007) and Spanish football (1966- 2006). Before every major competition, they would be talked up as potential winners, and without fail, they would disappoint. After a while, even the choke jokes become boring.

Had South Africa been playing Australia or India - who tend to find their A game on the biggest stage - you would have disregarded their chances. But in England, they're up against opponents whose catalogue of underachievement is as extensive as theirs. Between 1979 and 1992, England lost three World Cup finals. Since then, they haven't even made the semifinal. (England seem to reverse the ball a bit quicker, feels AB de Villiers)

The Champions Trophy record is a little better. On home soil in 2004, they had the final stolen from them by a remarkable ninth-wicket partnership for West Indies. In South Africa four years ago, Australia hammered them in the semifinal.

On British soil, England lead 12-7 in the head-to-head stakes. The one-day series last summer was tied 2-2, with England winning a low-scoring game at The Oval. This is one of only three Test-playing countries - New Zealand and Sri Lanka are the others - where South Africa have a losing record (16-17).

England's strength is unquestionably the bowling. James Anderson and Stuart Broad are a constant threat with the new ball, and even Ravi Bopara has done an excellent job in the middle overs. Even if Graeme Swann sits out again, with an eye on the Ashes, James Tredwell has bowled well enough not to be regarded lightly. 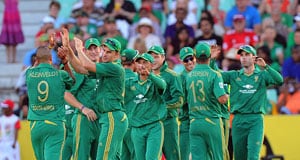 The batting is utilitarian rather than exciting, but it's worked for them so far in the tournament. Alastair Cook and Jonathan Trott are well capable of batting through, while Joe Root, Eoin Morgan and Jos Buttler add a dash of the unpredictable to a line-up previously too stodgy to trouble teams with lots of flair.

Even without Graeme Smith and Jacques Kallis, South Africa have looked solid and, at times, imposing with the bat. Colin Ingram has slotted in at the top, and there are a wealth of big-hitting options in the middle order.

The key to their fortunes, especially if conditions remain as overcast as they were on Tuesday afternoon, will be Dale Steyn. He was mainly stretching and limbering up on match eve, with de Villiers saying that he had basically been given the day off to rest his niggles.

On placid Indian pitches during the IPL, Steyn was a game-changer for a new franchise that lacked big names. Without him, West Indies would have cruised home in Cardiff the other day. The wicket of Marlon Samuels transformed the game, and was yet another example of why most regard him as the best bowler in the world.

A generation ago, Allan Donald, now South Africa's coach, was as highly regarded as Steyn is now. He blew it. Millions of South African fans traumatised by two decades of near misses will hope that Steyn doesn't.