Anderson, 30, started England's Champions Trophy opener against Australia at Edgbaston on Saturday (June 8) tied with Gough on 234 ODI wickets. But that changed when he had Mitchell Marsh caught by Eoin Morgan at point. 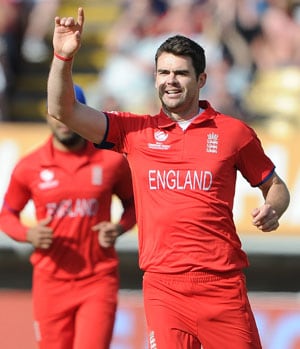 James Anderson, who last month became only the fourth England bowler to take 300 Test wickets, added another feather to his cap when he broke Darren Gough's record to become England's most successful One-Day International bowler.

Anderson, 30, started England's Champions Trophy opener against Australia at Edgbaston on Saturday (June 8) tied with Gough on 234 ODI wickets. But that changed when he had Mitchell Marsh caught by Eoin Morgan at point.

What really pleased Anderson, who finished with 3 for 30 to take his tally to 237 ODI wickets, was that his haul helped England to a 48-run victory.

"It's good fun breaking records, and I'm delighted with this one, but more importantly we're delighted to get off to a winning start in this tournament," said Anderson.

"Although it's a bit different to reaching 300 Test wickets last month, it still means a lot because I started my international career in one-day cricket, and I'm very happy with what I've achieved since then," added Anderson, whose first ODI wicket, on his debut, was that of Adam Gilchrist at the Melbourne Cricket Ground on December 15, 2002.

Not that he was especially proud of the way he dismissed Marsh.

"Funnily enough, I probably got the wicket which broke Goughie's record with the worst ball I bowled all day - a long hop outside off stump - but that's the way it goes sometimes," explained Anderson. "I used to look up to Goughie when I watched him bowl as a kid, and I ended up playing for England with him as well, so that makes it extra special."

After Saturday's match, George Bailey, the Australia captain, admitted his side had few answers to England's attack but Anderson also highlighted the role played by Ian Bell, who made 91 on his Warwickshire home ground, and the rest of the batsmen in compiling a challenging total of 269 for 6.

"As a side we bowled brilliantly. Stuart Broad and I set the tone up front, then Bres (Tim Bresnan) and James Tredwell did a fantastic job, but obviously it was set up for us by the batsmen."

England came into their Group A opener on the back of a 1-2 series loss at home to New Zealand but on Saturday, they showed the kind of form that persuaded some pundits this could be the event where they finally win their first major ODI title.

"In such a short tournament like the Champions Trophy, you have to hit the ground running, and that's what we've done. That was England back to near our best in one-day cricket - it was a good all-round performance," said Anderson.

Saturday's clash was also the first of at least 26 matches between England and old foes Australia, across all formats in both countries, during the next eight months.

"People talk about this being the first of 26 international matches against Australia in the next few months, but most of them are still way off the radar. We have to concentrate on this competition," said Anderson, set to lead England's attack when they begin their bid for a third straight Test series win over Australia next month.

But the unusually dry pitch at Edgbaston may be an indication that England plan to defend the Ashes on surfaces that aid spin and reverse swing, two areas where they are reckoned to have the advantage over Australia's attack.

"They (Australia) might not be playing well at the moment, but they are a strong side and we know they are still dangerous - they always are - and we needed to play well to beat them here," said Anderson. "We needed to get up to 270 to give ourselves a proper chance. Hopefully, we have the bowlers who can exploit the kind of pitches we'll be playing on in the Champions Trophy."

Comments
Topics mentioned in this article
Cricket ICC Champions Trophy 2013 England Cricket Team Darren Gough James Anderson
Get the latest updates on T20 World Cup, check out the T20 World Cup Schedule and Live Score . Like us on Facebook or follow us on Twitter for more sports updates. You can also download the NDTV Cricket app for Android or iOS.