Bopara's inclusion aside, there were few surprises, with off-spinner Graeme Swann and seamer Tim Bresnan both recalled following elbow problems. 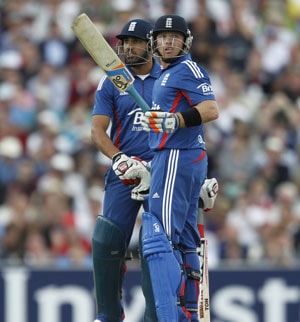 Ravi Bopara's England exile came to an end on Friday when the Essex all-rounder was named in the hosts' 15-man squad for next month's ICC Champions Trophy and the preceding one-day series with New Zealand.

Bopara has not played a 50-overs-a-side international since September and the stylish batsman and handy medium-pacer had not been selected in either of England one-day coach Ashley Giles's two previous squads in the format since the former Test spinner took charge of the limited overs side.

It seemed Bopara was fighting for his international future but he edged out fellow all-rounders Samit Patel, Luke Wright and Rikki Clarke.

Bopara's last four one-day international innings saw him manage just 22 runs in total at home to South Africa and he was omitted from the ODI squads for the recent tours of India and New Zealand.

"He's been given another opportunity because we know what he's capable of doing," England national selector Geoff Miller told Sky Sports.

"He's got all assets to his game -- there's the bowling aspect which has come on very, very well; batting-wise we know what he's capable of doing and he's very good in the field as well. He adds strength to the squad," the ex-England off-spinner added.

Bopara's inclusion aside, there were few surprises, with off-spinner Graeme Swann and seamer Tim Bresnan both recalled following elbow problems.

As expected, rising Yorkshire batting star Joe Root was included with star stroke-maker Kevin Pietersen already ruled out of the Champions Trophy because of a knee injury.

Jos Buttler was given the chance to cement his claim to be England's one-day wicketkeeper, with Test gloveman Matt Prior again omitted from a limited overs squad. Jonny Bairstow will provide back-up with the gloves, with the Yorkshireman aiming to force his way in as a specialist batsman.

The key contest for England fans and, though they won't yet say so publicly, players and officials this season is the Ashes Test series at home to Australia that follows the Champions Trophy.

Miller insisted England were not taking undue risks ahead of their defence of the urn by selecting Swann, their leading spinner, and Bresnan for the Champions Trophy.

"We take one series at a time. This is a very, very big series for us because we've never won a 50-over tournament.

"Yes, we've got the Ashes coming up, but I've watched both Bresnan and Swann bowling, we've talked to them, the medical staff have given them a good pass and we're very confident they can come through this."

As for Pietersen's Ashes availability, Miller said there had been a "slight improvement" in the South Africa-born batsman's knee injury but added England were more than capable of coping without 'KP'.

"He's world-class and you want world-class in your side, but it's not to be on this occasion," said Miller.

"We're quietly confident we can do well, with or without Kevin Pietersen."

England have never won a major 50-over tournament and the three-time losing World Cup finalists were beaten by the West Indies at The Oval in the climax of the last Champions Trophy staged in England in 2004.

A side again set to be captained by Test skipper Alastair Cook play the first of three one-dayers against New Zealand at Lord's on May 31 before opening their Champions Trophy campaign against Australia at Edgbaston on June 8.