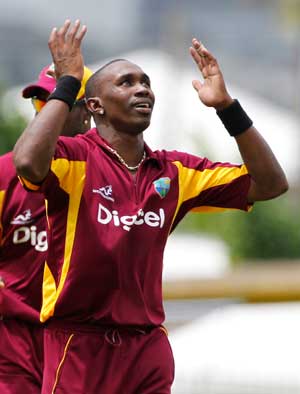 All-rounder Dwayne Bravo was on Saturday named as West Indies captain for next month's Champions Trophy, replacing Darren Sammy who stays in charge of the Test and Twenty20 squads.

Bravo, who took over from Sammy for the three-match whitewash of Zimbabwe in the Caribbean this year, leads a 15-man squad for the June 6-23 tournament in England.

"Our results in Tests and T20s have been showing consistent improvement and Sammy deserves every kudos for the work he has done in leading and moulding the team in these formats," said Clyde Butts, chairman of the selection panel.

"However our ODI results have not been as strong and we believe that it is best that we freshen the leadership of the team in this format.

"Dwayne Bravo is an experienced, seasoned and senior cricketer who has demonstrated leadership qualities."

His top score is 112 not out while 6-43 represents his best bowling return.

Bravo said he was honoured to be appointed West Indies captain.

"To be named captain of the West Indies is one of the highest honours and I am truly humbled to have been appointed to this most prestigious position."

Sammy congratulated Bravo and said he will give the new captain his full support.

"I congratulate Dwayne Bravo and give him my full support as he leads the ODI team and he can be assured of my unwavering commitment to the team and our plans to be champions of One Day cricket," Sammy said.

Kieran Powell was not considered for selection due to a finger injury.

West Indies are in Group B at the Champions Trophy along with India, South Africa and Pakistan.

Comments
Topics mentioned in this article
Cricket ICC Champions Trophy 2013 Gary Kirsten Dwayne Bravo Ravi Rampaul MS Dhoni Bangladesh Cricket Team
Get the latest updates on India vs South Africa and check out  Schedule, Results and Live Score. Like us on Facebook or follow us on Twitter for more sports updates. You can also download the NDTV Cricket app for Android or iOS.