Warne, who said Warner had let himself and the team down, recalled how senior players had been a key factor in maintaining team discipline at the start of his Australia career. 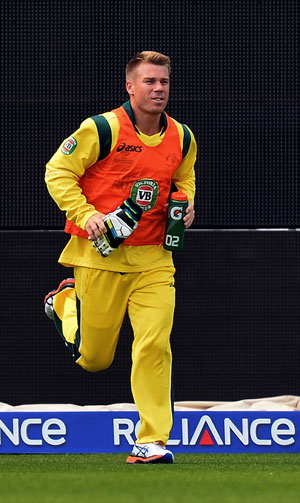 Shane Warne said the fall-out from David Warner's controversial attack on England batsman Joe Root could yet "bring Australia together" as they bid to regain the Ashes.

He will now miss the rest of title-holders Australia's Champions Trophy campaign, starting with their final group game against Sri Lanka at London's Oval ground on Monday, and their two warm-up matches ahead of the Ashes.

But he will be eligible for the first Test itself.

The 26-year-old was dropped for Australia's Champions Trophy match against New Zealand on Wednesday, although he did appear as 12th man, after the incident at an Australian theme pub in the central English city of Birmingham in the early hours of Sunday morning followed England's tournament-opening 48-run win over the Aussies.

"In a funny sort of way this could bring Australia together. I think it is a chance for them to gel together," Warne wrote in his column in Britain's Daily Telegraph on Thursday, before Warner's hearing was held.

"They really have to take this opportunity to sit down and have a chat about what they want to achieve,"

"After this incident England could be thinking to themselves Australia are there for the taking," the leg-spin legend, himself no stranger to off-field controversy during a colourful career, added.

"But if Australia regroup then they might get a surprise.

Warne, who said Warner had let himself and the team down barely three weeks since the opener was fined Aus$5,750 over an expletive-ridden Twitter tirade at two Australian cricket journalists, recalled how senior players had been a key factor in maintaining team discipline at the start of his Australia career.

"I was one of a group of young guys... rubbing shoulders with David Boon, Allan Border and Ian Healy. If you were not on time for the bus or out too late they absolutely nailed you verbally. You felt embarrassed and as if you had let the team down.

"We had a saying: 'Before midnight is your time. After midnight is cricket time'. If you can't do what you want before midnight it's not worth doing," explained the 43-year-old, who took 708 Test wickets before retiring from Australia duty in 2007.

Warne said Australia were missing the influence of captain Michael Clarke, yet to feature in the Champions Trophy while he undergoes treatment in London for a longstanding back injury.

It was a point emphasised by former England captain Michael Atherton, now cricket correspondent of The Times, who wrote in Thursday's paper: "The early part of any tour is vital for a captain to set out his stall, but Clarke has been absent... The team need their captain like never before."