The 29-year-old Sammy was replaced on Saturday by Bravo, with the West Indies Cricket Board citing the need to "freshen" the leadership of the ODI side in view of their recent results, reports CMC. 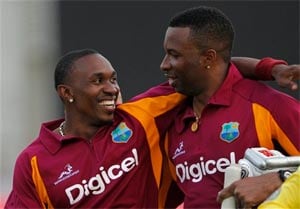 Out-going West Indies one-day captain Darren Sammy has pledged his "unwavering commitment" as he hands over to successor Dwayne Bravo for next month's Champions Trophy in England.

The 29-year-old Sammy was replaced on Saturday by Bravo, with the West Indies Cricket Board citing the need to "freshen" the leadership of the ODI side in view of their recent results, reports CMC.

"I congratulate Dwayne Bravo and give him my full support as he leads the ODI team and he can be assured of my unwavering commitment to the team and our plans to be champions of One Day cricket," said Sammy, who is currently playing in the Indian Premier League (IPL).

West Indies have lost nine of their last 18 ODIs, and suffered a whitewash to Australia in five-match series Down Under earlier this year.

Sammy led the side for three years, winning 19 matches and losing 30. Under him, West Indies drew with Australia 2-2 in a thrilling five-match series last year and also trounced New Zealand 4-1. He also led them into the quarter-finals of the 2011 World Cup in the Asian subcontinent.

Bravo, who has already led West Indies in ten ODIs, thanked Sammy for his contribution and said he was hoping to bring a dynamic brand of cricket to the side.

"To be named captain of the West Indies one-day team is one of the highest honours and I am truly humbled to have been appointed to this most prestigious position," he said.

"I am really looking forward to the opportunity to lead a great team that has a combination of young talent and experienced players."

He continued: "I must say congratulations to Sammy in his leadership of the team and I am very happy to be taking over from him. I am even happier that he remains in the team and I am looking forward to working with him along with the team management and all the players, especially vice captain Denesh Ramdin, Chris Gayle, Ramnaresh Sarwan, Kieron Pollard and Marlon Samuels.

"The brand of cricket that I intend to bring is a never-say-die attitude and I am really looking forward to the opportunity."

He is also currently playing in the Indian Premier League.