South Africa, who ran neck-and-neck in terms of runs with India till at least the 35th over, paid the price for losing far too many wickets after at least three middle-order batsmen frittered good starts. 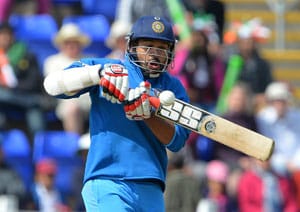 India began their campaign in the ICC Champions Trophy 2013 on a high with a 26-run win over South Africa in Cardiff. Chasing a target of 332, South Africa managed 305.

South Africa lost three top wickets in six runs to hand India their first win in group B as the ICC Champions Trophy got under way here on Thursday. Chasing an imposing victory target of 332, South Africa were all out for 305 as Indian won comfortably by 26 runs.

South Africa, who ran neck-and-neck in terms of runs with India till at least the 35th over, paid the price for losing far too many wickets after at least three middle-order batsmen frittered good starts. India, on the other hand, profited after their openers Shikhar Dhawan (114) and Rohit Sharma (65) laid a solid foundation with an opening stand of 127. This was the biggest difference between victory and defeat. Dhawan was adjudged Man of the Match. (Read more)

Robin Peterson's departure in the 25th over opened the floodgates as South Africa lost three quick wickets, including the man who had the caliber to take the game to the wire, skipper AB De Villiers. Two horrible mix-ups ruined the South African run chase. Peterson, who survived a run out chance when he was on 29, was not lucky the second time as a diving Ravindra Jadeja caught him well short after De Villiers refused to run. (Read: Unforced errors and miscommunication ruined us, admits AB De Villiers)

The left-handed Peterson was out for 68 (72 balls, 6 x 4s) and his 124-run third-wicket partnership with De Villiers kept South Africa in the running even after the Proteas lost openers Hashim Amla (22) and Colin Ingram (6) to Indian pacers Umesh Yadav (2/75) and Bhuvneshwar Kumar (2/49), respectively.

Peterson, struck in the elbow by a Yadav delivery when he was on 17, battled pain and stitched a confident stand with his captain till disaster struck. JP Duminy (LBW to Jadeja for 14) followed Peterson and then a rush of blood saw De Villiers throw his wicket away after a polished 70 off 71 balls, his 33rd ODI half-century. (Match stats)

At a time when South Africa needed to protect their wickets, De Villiers' exit gave India a great advantage. He charged out to Yadav, tried to slap a short of length ball to mid-wicket but ended up top-edging to square leg, where Jadeja held an easy catch. It was just needless.

From 182 for four, South Africa collapsed to 188 for six in the 33rd over when David Miller was run out without facing a ball. Faf Du Plessis flicked Suresh Raina and turned back for a second run but Miller refused. Ishant had all the time in the world to do the needful from mid-wicket.

A 50-run seventh wicket stand between Du Plessis and Ryan McLaren (71 not out off 61 balls, maiden ODI half-century) raised some hopes for the South Africans but that was not to be. Du Plessis (30 off 23 balls) holed out to Raina at mid-off off Ishant Sharma (2/66), once again a reliable batsman paying for indiscretion.

South Africa thus became the first team to lose a match while chasing a score at Cardiff. All previous seven (completed) ODIs saw the team batting second victorious. With their third victory in as many Champions Trophy games, India thus keep their all-win record intact against the South Africans.

Earlier, Dhawan's maiden ODI century and his 127-run opening stand with Rohit Sharma (65) helped India score a commanding 331 for seven wickets. India were put into bat after skipper Mahendra Singh Dhoni lost the toss in an overcast and chilly morning.

The morning session belonged to Dhawan. He was third out in the 38th over after scoring a well-paced 114, studded with 12 fours and a six. The only 'life' in his 94-ball innings came immediately after he scored his century. AB De Villiers missed a stumping chance after the left-hander stepped out to off-spinner JP Duminy and missed the line.

That blemish apart, Dhawan was the toast of the Indian crowd, almost 70 per cent of the 16000-strong turnout here. After he got his eye in, the Delhi batsman batted with gay abandon, often stepping out to find the little gaps in a tight off-side field. When he was on 45, Dhawan was struck on his helmet after failing to shy away from a McLaren bouncer. A cut behind his right ear didn't deter the gutsy batsman, who raced to his second ODI 50 in 44 balls.

Dhawan also featured in a 83-run second wicket partnership with Virat Kohli (31 off 41 balls) as he held the innings together till he perished in the 38th over trying to sweep Duminy but only managing to find substitute Aaron fielder Phangiso at square leg. Interestingly, in the last six years only two left-handers have made ODI hundreds against the South Africans. Kumar Sangakkara did it in Johannesburg in January 2012 and it was Dhawan's turn on Thursday.

After a cautious start, Dhawan and Sharma put the South African pacers to the sword on a Swalec Stadium wicket that had plenty of runs in it. At the toss, De Villiers said his pace quartet would make up for the absence of an unfit Dale Steyn. The script did not quite unfold that way.

India opted to play Sharma as an opener in place of Murli Vijay. Both batsmen had failed to score in the two warm-up games, but Sharma's experience and potential as an opener prevailed when it came to picking the playing XI. Sharma aptly vindicated his skipper's faith.

It was important to respect the South African pacers in the initial overs. Morne Morkel, who left the field after a groin strain in the 34th over, was the more probing of the two new ball bowlers beating the edge of the bat a few times. But there was little support from the other end as left-arm seamer Lonwabo Tsotsobe neither bowled the right line or length.

Dhawan was the first to open up, stepping out to Tsotsobe and slamming the first boundary of the innings after being patient for 16 balls. Sharma then fed off the burly left-armer with a four and a six as India shifted gears to end the first powerplay at 53 for no loss.

With Morkel and Tsotsobe failing to make a dent, De Villiers unleashed Rory Kleinveldt and McLaren. But the Indian openers were just too good for them. The skipper's disgust saw a spinner in operation in the 13th over. Left-arm spinner Peterson was introduced to the attack. Peterson's first two overs cost 19 runs.

Trying to flick McLaren, Sharma was out caught at the deep mid-wicket after scoring 65 off 81 balls. The knock contained a six and eight boundaries. Sharma's 14th ODI half-century will help skipper Dhoni breathe a little easy as India travel to The Oval in London to play West Indies next.

McLaren greeted Kohli with a bouncer that struck his visor. But confidence has been his middle name as the in-form Indian vice-captain wisely rotated the strike with Dhawan and was happy to play second fiddle. The first of his two boundaries came after 36 balls, but then he was out trying to go for a big stroke.

Dhawan's exit saw a mini collapse of sorts as Dinesh Karthik, promoted to No. 4 was out for 14 and Raina (9) flattered to deceive after slamming McLaren for a six at mid-wicket. Both Karthik and Raina fell to McLaren, who was South Africa's best bowler on the day with figures of 10-0-70-3.

Dhoni, caught at long-on for 27 off 26 balls, and Jadeja (47 off 29 balls) made crucial contributions at the end as India went for T20-style quick runs in the slog overs. India produced 82 runs in the last 10 overs with Jadeja the aggressor with seven fours and a six. There was no conflict of interest here.