Rani Rampal scored the equaliser for India vs the USA in their third and final Pool b match of the women's hockey World Cup. 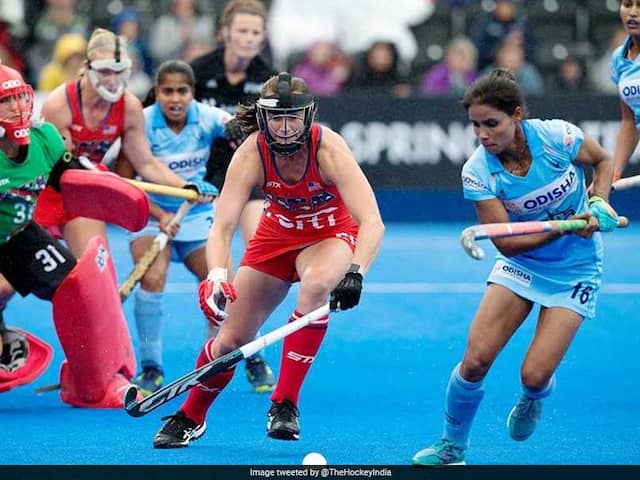 India played out a 1-1 draw against USA in the Women's Hokey World Cup pool B match.© Twitter

Indian women's hockey team produced a spirited performance to come back from a goal down and hold the higher-ranked USA to a 1-1 draw in their last Pool B match and progress to the knock-out stages of the women's hockey World Cup on Sunday. The draw enabled India to keep their campaign afloat in the tournament and progress to the crossovers while the Americans crashed out of the event. As per the rules of the tournament, the top teams from the four pools progress directly to the quarterfinals while the second and third placed teams will feature in the crossovers to decide the remaining four spots of the last eight round. Margaux Paolino (11th minute) broke the deadlock for world no.7 USA before skipper Rani Rampal equalised for 10th ranked India in the 31st minute.

The Indians started brightly with good forays into the US citadel but the forwards failed to breach the rival defence.

India secured their first penalty corner in the seventh minute but the Americans defended well.

As time passed by the Americans grew in confidence and started to attack the Indian goal quite frequently. From one such occasion, Margaux Paolino scored from a rebound in the 11th minute after her initial try was kicked away by Indian goalkeeper Savita.

Stung by the goal, the Indians continued to press forward and secured two penalty corners in the final minutes of the first quarter but dragflicker Gurjit Kaur failed on both occasion as USA ended the first quarter with a slender lead.

USA secured their first penalty corner three minutes into the second quarter but the Indians stood tall to thwart any danger.

The Americans then pressed hard and secured two more penalty corners in the second quarter but Indian goalie Savita was up to the mark.

Trailing by a goal, the Indians came out all guns blazing after the change of ends and drew level a minute into the third quarter through a penalty corner conversion by skipper Rani Rampal.

The Indians showed great energy and attacked the American goal in numbers. In the process they earned their sixth penalty corner in the 47th minute but this time Gurjit's powerful grounded flick was brilliantly saved by Briggs.

The Indians, thereafter, defended brilliantly to deny USA any breakthrough to secure the hard-earned win and prolong their stay in the tournament.