Both Marijne and Harendra have been given a tenure till the 2020 Tokyo Olympics. 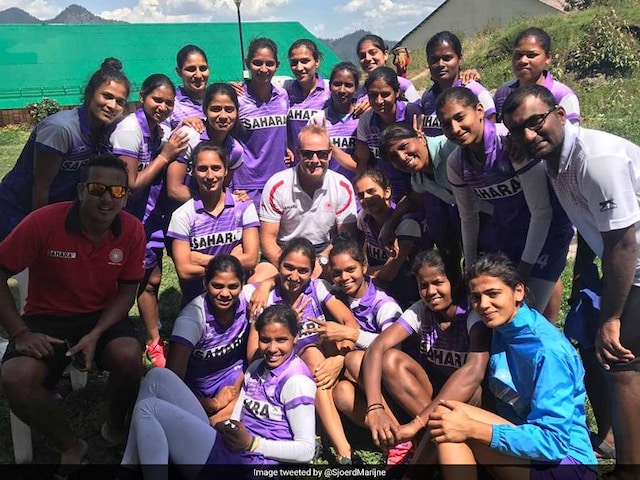 Waltherus Marijne was named chief coach of the men's side on Friday.© AFP

Women's national hockey coach Waltherus Marijne was, on Friday, named chief coach of the Indian men's team -- a stunning decision given that the Dutchman has no prior experience of handling a senior men's side. Marijne replaced Roelant Oltmans, who was sacked after a few ordinary performances in the past few months. Besides, World Cup-winning junior team coach Harendra Singh was appointed High Performance Specialist coach of the senior women's team.

While Marijne will take charge on September 20 after returning from an ongoing tour of Europe with the women's team, Harendra will be on the job tomorrow itself.

The decisions were announced by newly-appointed Sports Minister Rajyavardhan Singh Rathore on his official twitter page.

According to a top Hockey India official, both Marijne and Harendra have been given a tenure till the 2020 Tokyo Olympics.

The sports ministry issued a release stating that the decisions were taken yesterday after a joint meeting between the Sports Authority of India and Hockey India.

"This decision has been taken jointly by SAI and Hockey India on the basis of recent and past performance of Shri Harendra Singh, wherein under his coaching the junior men team won the Junior Men World Cup in 2016 at Lucknow.

The ministry stated that Marijne has accepted the new role.

The decision came as a bolt from the blue as HI had advertised seeking Oltmans' successor on its website just three days ago. HI had set September 15 as the deadline to apply for the post.

However, the a top official said HI withdrew the advertisement yesterday.

"The advertisement has been withdrawn as both HI and the Sports Authority of India felt Marijne is the best candidate for the job having spent more than six months in the country," the official told PTI.

It has been learnt that Marijne was initially reluctant to take up the role. The 43-year-old Dutchman, who was appointed as the Indian women's coach in February earlier this year, has never worked with a national men's team before.

But he agreed after HI and SAI convinced him.

The position for men's coach had fallen vacant after Oltmans was sacked last Saturday following a string of poor performances in the recent past.

Oltmans came to India fours years ago as a High Performance Director before assuming the role of coach in 2015 following Paul van Ass' removal.

Today's decision stunned the hockey fraternity, which felt it is a step in the backward direction.

Marijne has no experience of working with a senior men's side and with three important tournaments -- the Commonwealth Games and the Asian Games and the men's World Cup -- at home lined up in 16 months time, this decision has every chance of backfiring.

Between 2011-2014, Marijne was the national head coach for The Netherlands Under-21 men, apart from a short stint with Liaoning Men China.

The decision to appoint Marijne will also upset both the men's and women's teams' set-up as the Dutchman took over the women's side only in February this year.

Some feel Harendra, who was interested in the men's team role, could have been the best choice as he has a good relationship with all the players.

Having guided India to the junior World Cup title last year in Lucknow, Harendra has worked extensively with the juniors who are sure to be the core of the 2020 Tokyo Olympics plans.

Marijne's first assignment with the senior men's team will be next month's Asia Cup in Dhaka.