Rupinderpal Singh scored a brace, SV Sunil and Talwinder Singh one goal each to set up India's win. 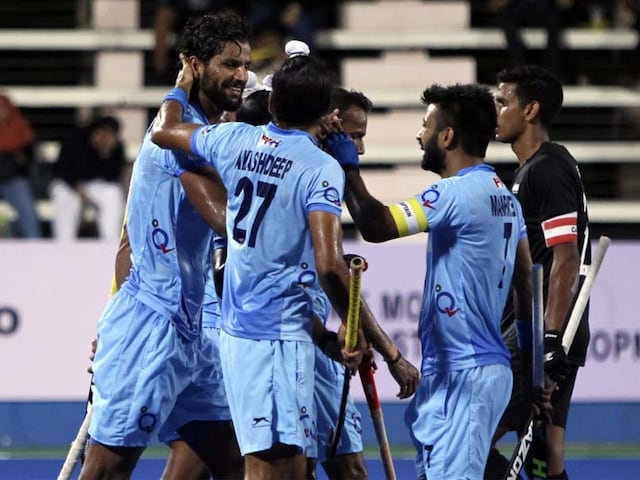 India defeated New Zealand 4-0 to clinch the bronze medal in the Sultan Azlan Shah Cup hockey tournament in Ipoh, Malaysia, on Saturday. Rupinderpal Singh was the hero as he converted two penalty corners in the match that set up the win. Rupinderpal sent identical ground drag-flicks into the corner past New Zealand goalkeeper Richard Joyce's outstretched right hand in the 17th and 27th minutes. SV Sunil then scored his first goal of the tournament in the 48th minute as he captitalised on a cross from Mandeep Singh into the goalmouth, while Talwinder Singh rounded off India's scoring in the last minute.

Earlier, Malaysia defeated Japan 3-1 in the playoff to decide the fifth place in the tournament standings.

Having failed to earn a place in the final after a listless show in the last preliminary league encounter against Malaysia, India gave an improved display to clinch the bronze medal - a shade below their silver medal behind Australia in the tournament last year.

Rupinderpal opened the scoring on India's third penalty corner, his stinging grounder leaving the defenders gasping. In the 27th minute, Mandeep had a good run on the left flank. After charging into the circle, his cross found no takers, but an obstruction on Mandeep earned India a penalty corner. Rupinderpal's shot on the fourth penalty corner struck a defender's foot and another penalty corner was awarded, which he duly converted with a fine low shot.

After failing to feature in goal-scoring action in the entire tournament, Sunil finally made en entry on the score-sheet by deflecting in Mandeep's cross from right in the 48th minute.

Talwinder Singh also got among the goal scorers for the first time in the last minute of play after picking a pass from Manpreet in the circle. Talwinder created some space for himself and sent a reverse shot into the boards.