Mandeep Singh and Akashdeep Singh were among the scorers as India beat Belgium 2-0. 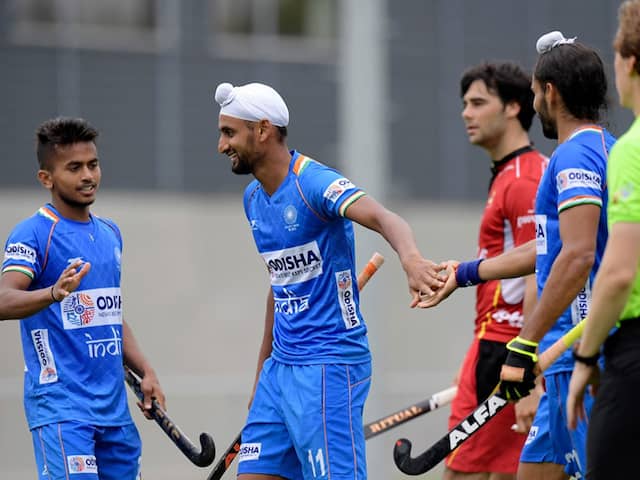 Mandeep Singh and Akashdeep Singh scored in the second half to give India a win.© Hockey India

Mandeep Singh and Akashdeep Singh scored in the second half to give India a win over Belgium in the opening game of the three-match series between the teams. In a gritty first quarter, India were the ones who took the initiative early, forcing Loic van Doren into a save from the first Penalty Corner of the game. Very soon it was India's turn to defend and Krishan Pathak who started the game in the goal was up to the task, pulling off a smart save off a Belgium Penalty Corner to ensure the teams went into the break locked in a stalemate.

India rushed off the blocks in the second quarter and had a succession of Penalty Corners within the first minute of the period. The Belgium defence was at hand though denying them an opener. Despite controlling a large amount of possession India found it difficult to find a breakthrough. The teams went into half-time without troubling the scorers.

India kept up the tempo in the third period and forced van Doren into multiple saves. All the circle entries and creative play finally found it's reward in the 39th minute as Mandeep Singh scored to give them the lead. It was this narrow lead they carried into the final quarter.

Belgium were forced in the attack in the final quarter and almost immediately tested Sreejesh in goal. He was up to the task pulling off a succession of saves to keep his team in the lead.

India capitalised on Belgium's attacking necessity to earn a pair of PCs themselves. Van Doren's heroics prevented a second. In the 54th minute, Akashdeep Singh finished off a slick move to double India's lead.

It was a lead they held to finish the game and take a 1-0 lead in the series. The second game will be played on September 28.