France will be up against the winners of the match between Korea and Malaysia. 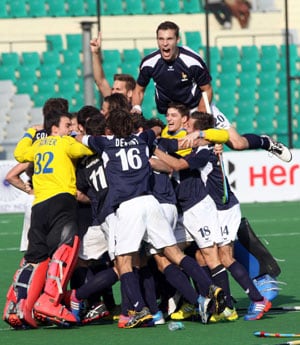 In another quarterfinal, Netherlands eked out a hard-fought 3-2 win over New Zealand to progress to the last-four stage.

Belgium's first goal came from an own goal in 29th minute, while Maxime Plennevaux (37th, 47th) and Dorian Thiery (42nd) were the other goal-getters.

It was an exciting clash between Belgium, widely expected to do well in this Junior World Cup, and the French team that had only lost to them on an overtime golden goal in the semi-finals of the European Cup.

Belgium earned a penalty-corner via a video-referral in the second minute, only to shot wide.

Pieter Van Straaten had the first chance for France with a high backhand shot that was deflected by Arnaud Flamand in the Belgian goal.

France wasted their first penalty-corner but Charlet was bang on target in the 15th minute to give the lead to Les Bleus.

Belgium immediately turned up the heat and equalised in the 29th minute through an own goal as both the teams went into the breather locked at 1-1.

After the crossover, it rained goals as both France and Belgium were in no mood to give an inch to each other.

Plennevaux gave Belgium the lead in the 37th minute, but Genestet brought France back on par three minutes later with a well-executed penalty-corner conversion.

Thiery put Belgium back in the lead two minutes later and then Plennevaux scored a spectacular diving goal to give the team a two-goal cushion for the first time in the match. But the Belgians were in for a rude shock as France netted two goals in a span of 10 minutes to level the scores.

Kieffer brought France back within reach and then Ponthieu tied the score in the 58th minute.

Both teams threw caution to the wind in the final 10 minutes of the match.

Belgium seemed to have the upper hand but France earned a penalty-corner with a video-referral and scored their third goal in a row that came from the sticks of Kieffer, his second of the match and the seventh goal of the period, to take the lead with four minutes to go.

Belgium replaced their goal-keeper with a field player two minutes from time, but the French defence stood tall to make their maiden appearance in the semifinal of the tournament.

Earlier, for Netherlands, Thierry Brinkman (28th, 39th) scored two field goals, while the other came via penalty stroke from the sticks of Tom Hiebendaal in the 42nd minute.

The Black Sticks fought hard and scored through Nicholas Woods, who converted a penalty corner in the 38th minute and a field effort from Benedict van Woerkom (60th), but it was not enough to earn them a place in the semifinals.

The Netherlands will face the winner of the other quarterfinal match between Australia and holders Germany in the semifinals, while France will be up against the winners of the match between Korea and Malaysia.

Comments
Topics mentioned in this article
Hockey Belgium Lyon Costa Rica France Greece Romania
Get the latest updates on IPL 2020, check out the IPL Schedule for 2020 and Indian Premier League (IPL) Cricket live score . Like us on Facebook or follow us on Twitter for more sports updates. You can also download the NDTV Cricket app for Android or iOS.