India's persistent attacks resulted in the first goal in the fifth minute when Sunil scored from a narrowest of angles. 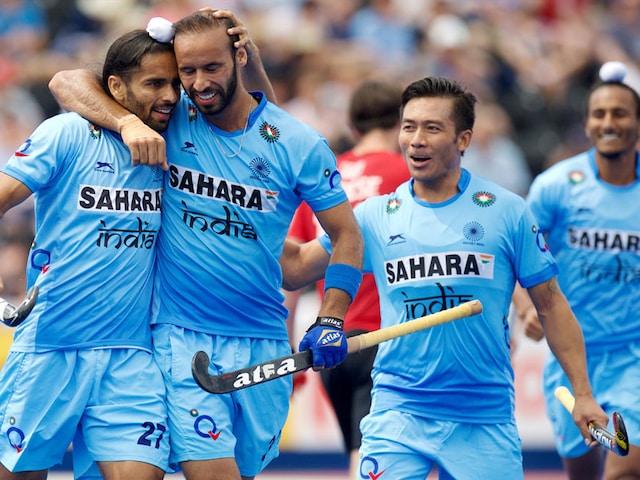 India celebrating after scoring a goal against Canada© Hockey India

Continuing with their impressive run, India blanked Canada 3-0 to register their second consecutive win at the Hockey World League Semi-Final on Saturday. India scored three field goals through S V Sunil (5th minute), Akashdeep Singh (10th) and Sardar Singh (18th) to pocket full three points from the Pool B game at the Lee Valley Hockey Centre. The win virtually secured India's place in the quarterfinals of the tournament. India had earlier defeated Scotland 4-1 in their opening encounter on Thursday. The sixth ranked Indians will play arch-rivals Pakistan in their next pool match tomorrow.

India meant business from the onset and secured their first penalty corner as early as in the opening minute of the game, but Harmanpreet Singh's effort sailed over the goal.

Two minutes later, India's last match hero Ramandeep Singh's shot from the top of the circle was saved by David Carter in front of the Canadian goal.

India's persistent attacks resulted in the first goal in the fifth minute when Sunil scored from a narrowest of angles after his initial shot was saved by Carter.

India doubled their lead five minutes later through Akashdeep who neatly deflected in a Ramandeep pass.

India continued in the same vein in the second quarter and increased their lead in the 18th minute through Sardar who pushed home from a Ramandeep pass.

India earned their second penalty corner in the 25th minute but Jasjeet Singh Khular's try went wide of the target as Roelant Oltmans' men went into the breather with a comfortable 3-0 lead.

Minutes later, India secured their third penalty corner and skipper Manpreet Singh's try from a variation was brilliantly kept away by Carter.

The Indians continued to press hard and garnered two more penalty corners but failed to capitalise on the chances yet again.

India won the game today, but coach Oltmans would be worrying about his team's poor conversion rate from penalty corners.

Meanwhile, in the first match of the day, China defeated Korea 5-2 in Pool A.