By virtue of this win, Canada not only finished fifth in the tournament but also qualified for next year's World Cup. 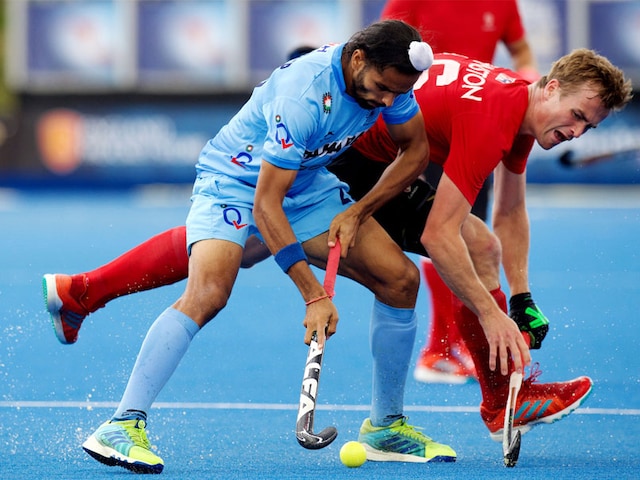 It was India's second upset loss against a lower-ranked side in the tournament.© Hockey India

An inconsistent India wasted chances galore to finish a disappointing sixth in the Hero Hockey World League Semifinals after being stunned 2-3 by lowly Canada on Sunday. It was India's second upset defeat against a lower-ranked side in the tournament after having lost to Malaysia in the quarterfinals. Gordon Johnston (3rd, 44th minutes) scored two goals while Keegan Pereira (40th) found the net once for the 11th ranked Canadians. Harmanpreet Singh (7th, 22nd) converted two of India's nine penalty corners.

By virtue of this win, Canada not only finished fifth in the tournament but also qualified for next year's World Cup, to be held in the Indian city of Bhubaneswar.

The loss, although, didn't deter sixth-ranked India's qualification to the Hockey World League Final, to be held later this year, and the World Cup as they are already assured of places in both the events by virtue of being the hosts.

However, it definitely counts for a morale-shattering outing.

India started the encounter as the overwhelming favourites having defeated the same opponents 3-0 in the pool stages, but the script panned out to be completely different as, with a World Cup berth at stake, Canada played with great determination and gave their higher-ranked rivals a run for their money.

Even though India dominated the share of possession and had more shots at the goal compared to their opponents, Canada surprised their rivals when it mattered the most with some great counter-attacks.

India continued their dismal performance from penalty corners as they converted just two out of nine they earned in the match.

Canada took the lead early on in the game when Johnston converted a penalty corner in the third minute.

In the second quarter, the Indians secured their third penalty corner but Harmanpreet's low flick was saved by goalkeeper Antoni Kindler, who was brilliant under the Canadian goal today.

Seconds later, Harmanpreet again wasted another penalty corner for India before the dragflicker found the target in the 2nd minute with a powerful low flick to hand his side the lead.

Canada mostly relied on defending in numbers and surprising India on counters.

The Canadians too were dismal with penalty corners, converting just one of the five they earned in the entire 60 minutes.

In the 26th minute, Talwinder's effort, after a fine interchange with Akashdeep Singh, was saved by an alert Kindler.

India secured their sixth penalty corner in the 27th minute but Harmanpreet was off the mark to go into the breather with a marginal 2-1 lead.

After the change of ends, India secured two more short corners but to no avail.

The missed chances cost India dearly as Canada struck twice in a span of four minutes to stun the Indians.

Down by a goal with just a quarter to left, the Indians went all out attacking and secured two more penalty corners but, as has been the case in the tournament, the chances went wasted.

Credit should also go to the Canadian goalkeeper Kindler, who produced some brilliant saves including a breathtaking effort to deny Mandeep Singh in the 50th minute.

Thereafter, the Canadians defended in numbers to register one of their most memorable wins.

Comments
Topics mentioned in this article
India Canada Hockey
Get the latest Cricket news, check out the India cricket schedule, Cricket live score . Like us on Facebook or follow us on Twitter for more sports updates. You can also download the NDTV Cricket app for Android or iOS.