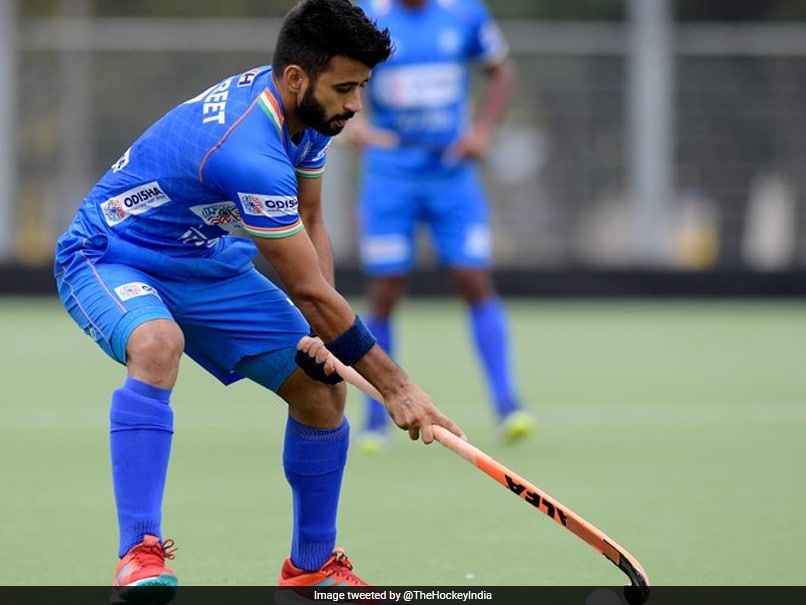 Manpreet Singh was named the FIH Player of the Year.© Twitter

India men's hockey captain Manpreet Singh is confident of his side putting up a good show and ending the country's 40-year-old medal drought at the Olympics this time round in Tokyo. India last won a gold in Hockey in 1980 in Moscow Olympics. Since then, they have participated in eight Olympic editions but have failed to make a podium finish. In Rio, the Indian team finished at a dismal eighth position. However, Manpreet doesn't want the team to look into past Olympic records and wants his troops to focus on their strengths.

"We do not like to look too much into past records; every game is a new learning curve. We are going into the Olympics with a positive frame of mind and good run of results," Manpreet told IANS in an exclusive interview.

"We are confident going into the Olympics in Tokyo. We managed to get the better of current World Champions Belgium which is an indication that we are going into the tournament with a lot of positivity. We will try our best to play good hockey on the pitch and try to win a medal at the Olympics," he added.

According to the midfielder, going into the Olympics, the team needs to improve their defense to put up a tough fight against top oppositions like Australia, Netherlands and Belgium.

"There are plenty of positives going into the Olympics, for instance we are very dangerous on counter attack; we are also very good at converting penalty corners as we have excellent drag flickers in the team. So the more we use them, the better it is for us. As I mentioned earlier, we are looking to improve our defense and be more consistent," he said.

The Red Bull athlete also spoke about coach Graham Reid's role in improving the performance of the team in the past two years.

"We have improved a lot under Graham; he believes that we need to get better at attack and in defense. Whenever we enter the opponents circle, we should try to achieve something; be it a penalty corner or a goal," he said.

"He believes that we are a very good attacking team so we will get a chance in the opening 10 minutes and if we score a goal early, it will be a huge morale boost.

"Graham also believes that if we improve on our defense, then obviously we will concede less and put the opposition under pressure," he added.

India had not performed well in the 2018 World Cup and were knocked out in the quarter-finals after losing to Netherlands.

However, in 2019, as captain, Manpreet led his team to victory in the FIH Olympic Qualifiers, thus securing a spot at the Tokyo Olympic Games.

"We played very well against Netherlands and Belgium, now we shall play against Australia. This is a great challenge and a learning curve for us prior to the Olympics. As a team, we are looking at playing together as one unit and improve our consistency by winning as many games as possible," said the India skipper.

Manpreet, who has become the first member of the India national team to win the Best Player award since the awards were instigated in 1999, also showered praise on his female counterpart Rani Rampal for winning the World Games Athlete of the Year 2019 Award.

"Rani Rampal deserves all the accolades that she has received so far as she has worked very hard for this and has led her team from the front. The entire men's hockey team is delighted that she received the award. We are all hoping that she continues to do well and lead India to glory in the Olympics," he said.

Manpreet is also expecting the women's team to make a podium finish in Tokyo in what would be the only third appearance of the Indian women's hockey team at the Olympics.

"We are hoping that the women's hockey team comes home with a medal and a podium finish. They have been performing really well recently and we would like to wish them all the best and hope that they will make the entire nation proud in Tokyo," he said.

Comments
Topics mentioned in this article
India Women India Rani Rampal Manpreet Singh Hockey
Get the latest updates on ICC T20 Worldcup 2022 and CWG 2022 check out the Schedule, Live Score and Medals Tally. Like us on Facebook or follow us on Twitter for more sports updates. You can also download the NDTV Cricket app for Android or iOS.