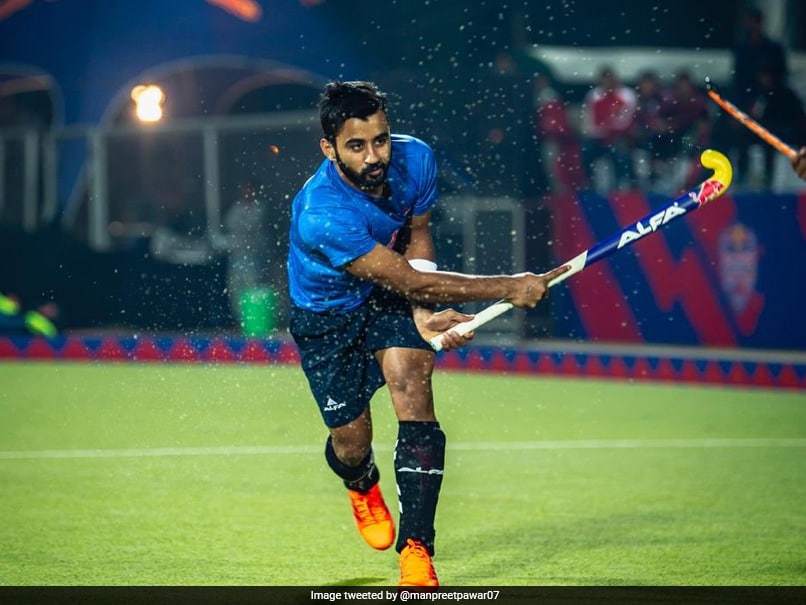 Manpreet Singh polled a total of 35.2 per cent of combined votes.© Twitter

India's men's hockey teamcaptain Manpreet Singh on Thursday became the first Indian to win the International Hockey Federation's (FIH) Player of the Year award, capping a memorable 2019 season in which he led the side to Olympic qualification. The 27-year-old midfielder, thus, became the first from the country to win the accolade since the awards were introduced in 1999. He beat competition from Belgium's Arthur van Dorren and Lucas Villa of Argentina, who came second and third respectively. Manpreet polled a total of 35.2 per cent of combined votes, which includes National Associations, media, fans and players.

Van Dorren, on the other hand, got combined vote share of 19.7 per cent while Villa polled 16.5 per cent in his favour.

Other players who were nominated for the award were Victor Wegnez of Belgium and Australian duo of Aran Zalewski and Eddie Ockenden.

Manpreet, who had represented India at 2012 London and 2016 Rio Olympics, has enjoyed a long career in the national team since he made his debut in 2011.

He now has 260 international appearances under his belt. Last year, Manpreet led India to victory in the FIH Olympic Qualifiers, securing their Tokyo Olympics spot.

Talking about the last season, Manpreet said: "If you look at our year, we did well in every tournament we participated in. Be it the FIH Series Finals in June or the test series in Belgium where we played the hosts as well as Spain and beat them.

"Our biggest goal in 2019 was to book our berth at the Olympics."

India achieved that goal in style, beating Russia in the Olympic Qualifiers over two legs -- 4-2 and 7-2. Manpreet dedicated the award to his teammates, saying without their support it wouldn't have been possible.

"I am truly honoured to win this award and I would like to dedicate this to my team. I also thank my well wishers and hockey fans from around the world for voting in my favour. It is truly humbling to see so much support for Indian hockey," he said.

FIH CEO Thierry Weil congratulated all the winners, including Manpreet on their achievements.

"On behalf of FIH, I would like to extend heartfelt congratulations from the whole hockey community to all winners of the 2019 FIH Stars Awards and also to all nominees.

"Thanks to their skills and performances, as well as their teammates, they invite fans all over the world to experience great emotions. We are very grateful to them," he said.

"He has matured over the years as a player and has proved his importance in the team. He has led India to important victories," he said.