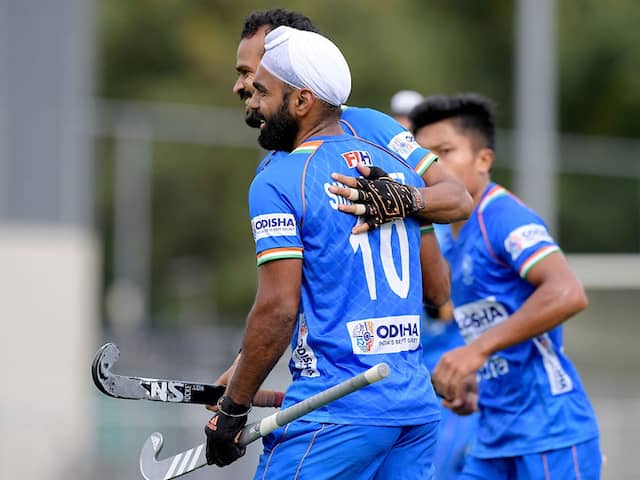 The Indian men's hockey team eked out a fighting 2-1 win over reigning World and European champions Belgium to register their fourth consecutive win of the tour in Antwerp on Tuesday. Amit Rohidas (10th minute) and Simranjeet Singh (52nd) scored for world no.5 India. Belgium's lone goal came from the stick of captain Felix Denayer in the 33rd minute. Riding high on confidence after their 5-1 win over Spain in the third match of the Tour of Belgium, the Indian men's hockey team started on an attacking note against the hosts and earned a penalty corner in the 10th minute, which was duly converted by Rohidas to give his side the lead.

World no. 2 Belgium, however, did not sit back and tried to counter the Indian attacks.

But some last-ditch defending from the Indians coupled with some fine saves by experienced goalkeeper PR Sreejesh helped the visitors go into first quarter break with a one goal lead.

The second 15 minutes had a similar story as the visiting team enjoyed possession in the opening few minutes, creating a few chances but the quarter ended with the hosts putting intense pressure on their opponents.

With five minutes to go for half-time, Belgium earned their first penalty corner of the match, but Indian custodian Krishan B Pathak, who replaced Sreejesh for the second quarter, made an outstanding save to deny the world champions from levelling the scores.

India, thus, managed to maintain their one goal lead at the halfway break.

Belgium showed their quality in the opening minutes of the third quarter as they secured another penalty corner in the 33rd minute and Denayer scored with stunning drag-flick to level the scores.

Thereafter, both the teams seemed focused on not giving away possession cheaply as the third quarter ended on level terms.

Belgium made a fast start in the final quarter and won a couple of penalty corners in quick succession but Pathak was upto the task again as he made some crucial diving saves to deny the hosts.

India, on the other hand, were happy to sit back and wait for their opportunity.

Down by a goal, Belgium attacked in numbers in the dying stages of the match and in the process earned another penalty corner, but the Indians came up with some resolute defending to secure their fourth consecutive win of the tour.