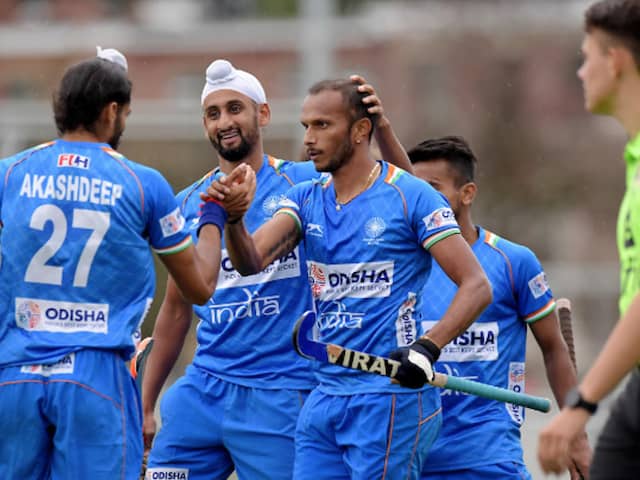 The Indian Men's Hockey Team carried on its rich vein of form with a 5-1 thrashing of Spain in the Tour of Belgium competition on Sunday. Harmanpreet Singh scored twice for India and Akashdeep Singh, SV Sunil and Ramandeep Singh scored one goal each. India had recorded a 6-1 win against Spain a day earlier and Sunday's match saw India assert its dominance once again. The win means India maintained their winning streak in the tournament, having beaten the hosts Belgium 2-0 in their opening match.

India got off to a slow start, falling behind early to a goal by Spain's Alvaro Iglesias in the 3rd minute. But India hit back two minutes later through Akashdeep Singh's field goal. India then dominated the rest of the first quarter, with the Spain goalkeeper saving a penalty corner.

The second quarter saw India take the lead. SV Sunil, on his return to the team, scored a wonderful strike to make it 2-1 in India's favour. The forward ran in from the right flank and put the ball past the Spanish keeper Quico Cortes in the 20th minute. The score remained 2-1 at the end of the second quarter.

India increased the pressure on Spain in the third quarter with a flurry of opportunities inside their opponents' circle. Ramandeep Singh capitalised on one such chance in the 35th minute, extending India's lead to 3-1.

Dragflicker Harmanpreet Singh, who also scored a brace against Spain in their match on Saturday, then scored from two penalty corners to seal a comfortable win.

The fourth match of the Tour of Belgium will see the Indian Men's Hockey Team face World No. 2 Belgium on Tuesday.