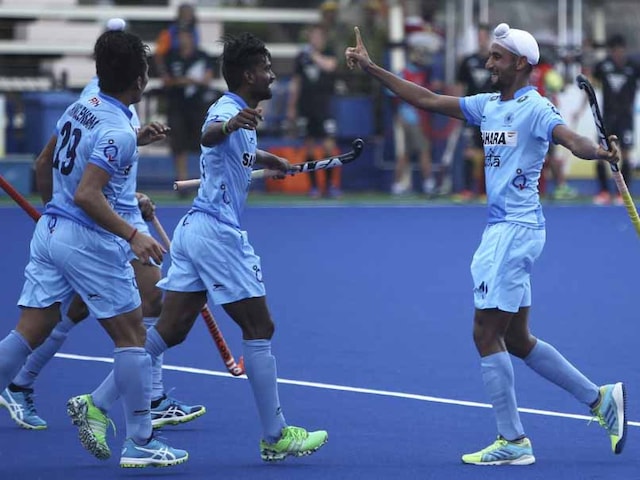 India came up with a brilliant performance against New Zealand by winning the match 3-0 in the Azlan Shah Cup as Mandeep Singh got his name in the score sheet pretty early on in the match. Later, Harmanpreet Singh converted two penalty corners to extend India's lead as the defenders did their job by not giving an opening to the Kiwis who had their moments but could not convert any of their chances. Following a 2-2 draw against Great Britain in the opening game on Saturday, India now have four points from two outings. Mandeep Singh opened the Indian account with a fine deflection in the 23rd minute before Harmanpreet produced two fine drag-flicks to penetrate the Black Sticks defence.

After allowing the experimental New Zealand team to have three shots at the goal in the first quarter, the Indian team settled down to dominate the match thereafter. The Indian game on Sunday was not disturbed by the afternoon showers and lightning, which have been a feature of the tropical weather this season.

On Sunday, the first signs of match-disrupting lightning occurred soon after the Indian players went off the pitch on completion of their game.

It was New Zealand, who earned the first penalty corner in the sixth minute, but it could not pose any danger as the low shot went straight to goalkeeper P.R. Sreejesh, who kicked it out of the circle.

As the Indian defence took time to settle down, New Zealand had two early shots at the citadel before Akashdeep Singh took an ambitious try from the top of the circle in the 10th minute, only to see his reverse drive soar high over the cross-bar.

Two minutes later, Manpreet Singh sent a diagonal ball into the circle to S V Sunil, who shot wide with only goalkeeper Devon Manchester to beat.

India broke the deadlock in the 23rd minute when Chinglensana Singh sent a reverse shot from top of the box into the goalmouth, where Mandeep did exceptionally well to deflect the shoulder high ball past the goalkeeper.

Harmanpreet then came into the picture with a drag-flick off the first penalty corner. The stinging shot went into the left corner of the board to make it 2-0 in the 27th minute.

India forced two penalty corners in as many minutes just before half-time but were stopped on both occasions. In the 30th minute, on India's fourth penalty corner, New Zealand defended stoutly as Sardar Singh picked up the ball behind Harmanpreet and tried to keep up the pressure by flicking the ball into the scoring zone.

Playing in his 200th international on Sunday, Sunil had a chance to make an entry on the scoresheet five minutes after half-time when he was again in a one-on-one position with the goalkeeper but ended up flicking wide of the mark.

Akashdeep took a try from a very narrow-angle in the 39th minute, but the shot went over the bar. Harmanpreet came back to round off the Indian scoring with another penalty corner conversion, this time sending a soaring drag-flick into the top corner of the net in the 47th minute.

With Harmanpreet in fine nick, he was allowed to take the shot on six of India's seven penalty corners, although the push could not be stopped on two occasions. Rupinderpal Singh only took the last of India's penalty corners and his shot was blocked by the Black Sticks' goalkeeper.

Comments
Topics mentioned in this article
India New Zealand Hockey
Get the latest Cricket news, check out the India cricket schedule, Cricket live score . Like us on Facebook or follow us on Twitter for more sports updates. You can also download the NDTV Cricket app for Android or iOS.