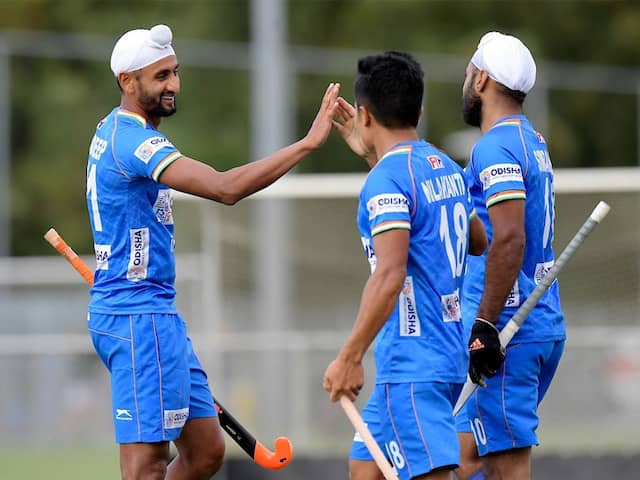 Dragflicker Harmanpreet Singh scored a brace as the Indian men's hockey team defeated world number eight Spain 6-1 in their second match of Tour of Belgium in Antwerp on Saturday. Harmanpreet (28th, 32nd minutes), skipper Manpreet Singh (24th), Nilakanta Sharma (39th), Mandeep Singh (56th) and Rupinderpal Singh (59th) were the goal scorers as world number 5 India capped off a brilliant performance. India started the match aggressively and almost immediately were in the ascendancy by creating problems for the Spanish defence with a host of circle penetrations.

Despite the possession, India found it tough to win a penalty corner or create clear scoring opportunities in the first quarter.

It was, in fact, Spain who won the first penalty corner of the game towards the end of the first quarter, forcing India's goalkeeper PR Sreejesh into a fine, reflex save to keep the scores level.

Finally in the 24th minute, it was captain Manpreet who broke the deadlock as he slotted home to give India the lead. Within four minutes, the lead was doubled as Harmanpreet scored India's second of the game from a penalty corner.

However, it was Spain's turn to open their account as they pulled a goal back right before half-time, which meant the teams went into break with India leading 2-1.

India pressed hard after the change of ends and their efforts bore fruit when Harmanpreet scored his second of the day by converting another penalty corner in the 32nd minute to restore his side's two-goal cushion.

Midfielder Nilakanta Sharma then scored a superb field goal in the 39th minute to make it 4-1 in India's favour at the end of the third quarter.

India kept control of the game in the final quarter and showed their quality as they did not allow Spain any chance to mount a comeback.

In the 56th minute, Mandeep scored India's fifth goal before Rupinder converted a penalty corner just a minute from the hooter to register the comfortable win for his side.

India will take on Spain again in the third match of the tour of Belgium on Sunday.