Hosts India produced a spirited performance to stun Olympic silver medallist Belgium in the shoot-out and progress to the semifinals of the Hockey World League final. 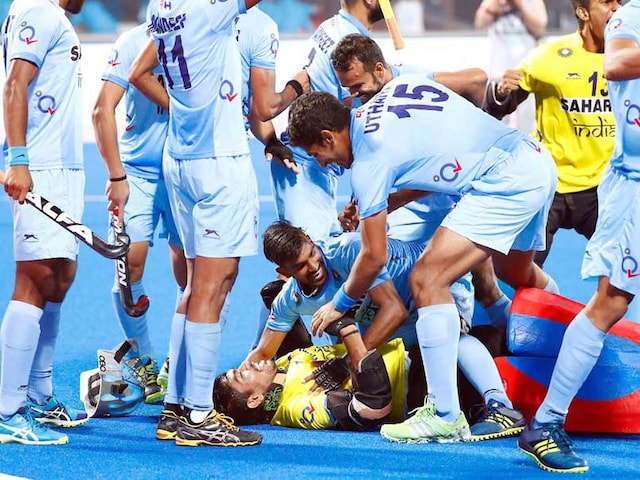 Hosts India produced a spirited performance to stun Olympic silver medallist Belgium men's national field hockey team in the shoot-out and progress to the semifinals of the Hockey World League (HWL) final after both the teams were locked at 3-3 at the end of regulation time on Wednesday. Warming the bench for most part of the match, goalkeeper Akash Chikte dished out a superb performance to hand India their first win of the tournament, a win that will erase all their wrongdoing of the pool stages. It was a great exhibition of attacking hockey from both the sides as the regulation time yielded as many as six goals, three each from either side.

But Chikte, who gave his place to young Suraj Karkera in the match and was brought into action in the 47th minute, stood up to his coach's faith and produced four brilliant saves in the shoot-out that went to sudden death to seal the famous win for India.

Unlike their last two matches, the Indians made bright start to the game and had a wonderful chance to take the lead in the opening minute.

But an unmarked SV Sunil was guilty of wasting the golden opportunity on the far post as he deflected wide a measured reverse stick cross from Gurjant Singh.

The hosts kept up the pressure and secured their first penalty corner in the fifth minute but Harmanpreet Singh's attempt was easily dealt by Belgium goalkeeper Vincent Vanasch.

The Indians controlled the tempo of the match, at least in the initial 10 minutes.

But the Belgians found the net against the run of play in the 11th minute when John-John Dohmen pushed in skipper Thomas Briels' backhand pass but to the relief of the capacity crowd the goal was disallowed for back stick after India went for video referral.

The Indians earned penalty corner just seconds from half time but again Harmanpreet's attempt was easily anticipated by Vanasch.

After a barren first, the third quarter witnessed fast-paced, exciting hockey that yielded as many as three goals.

Just a minute after the change of ends, Gurjant gave India the lead, pushing in a ball from goalmouth melee after Sunil's initial reverse shot was saved by the Belgian goalkeeper.

Four minutes later, India doubled their lead from their third penalty corner to sent the crowd into a frenzy.

All this while in the tournament the Indians were predictable with short corners and it took a fine variation try from the hosts to make the scoreline 2-0 in their favour.

Harmanpreet converted the set piece after being set up by a beautiful dummy by Rupinder.

But the Red Lions, the no.3 side in the world and known for their fighting spirit, made a valiant fightback and struck twice from penalty corners in a span of eight minutes to draw level.

On both occasion Loick Luypaert was bang on target with his set piece conversions to silence the crowd.

In the very next move India restored their lead when Rupinder converted their fourth penalty corner.

The Belgian, who were unbeaten in the pool stage, had two great chances in the form of two penalty corners at the fag end of the match to score the winner but the Indians defended well to take the game into shoot-out.

In the topsy-turvy shoot-out, Lalit Upadhyay, Rupinder and Harmanpreet scored from India.

India's semifinal opponent will be decided after the conclusion of tomorrow's remaining two quarterfinals.