India are currently sitting atop Pool A with six points from two wins while Pakistan are placed second with four points. 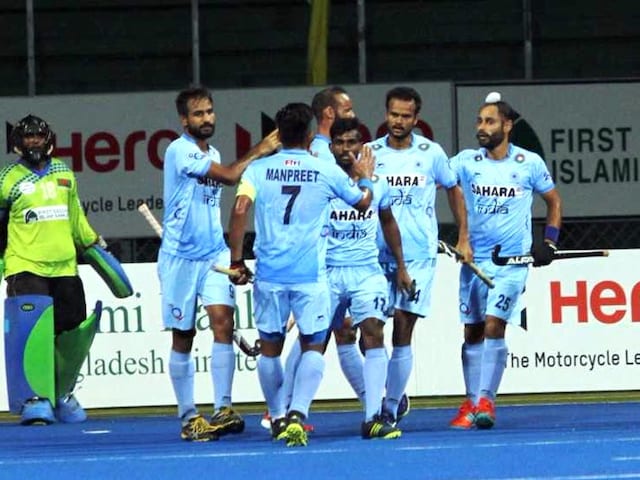 India will be facing arch-rivals Pakistan on Sunday.© Hockey India

Two easy wins garnered, a confident India would face its toughest test in the event when it takes on arch-rivals Pakistan in the much-anticipated clash of the Asia Cup hockey tournament, on Sunday. Rated as favourites to win the title, the Indians have been impressive so far, beating Japan and hosts Bangladesh comprehensively in their opening two Pool A matches. After beating Japan 5-1 in their opening match, the Manpreet Singh-led side mauled minnows Bangladesh 7-0 on Friday. Pakistan, on the other hand, have had a mixed outing so far. While they thrashed Bangladesh 7-0 in their campaign-opener, they were held to a 2-2 draw by Japan in their next match.

India are currently sitting atop Pool A with six points from two wins while Pakistan are placed second with four points. With two wins, India are comfortably through to the Super 4 stage of the tournament and the Sjoerd Marine-coached side would be hoping to finish the pool stages with an all-win record. In the first two games, the Indians have showcased beautiful one-touch hockey and used both flanks to create numerous scoring chances.

What is heartening is that the Indians have scored some excellent field goals but a matter of concern for them is their penalty corner conversion rate.

Against Bangladesh India earned as many as 13 penalty corners but could make use of just two.

Less than a month into his new job replacing the legendary Roelant Oltmans, tomorrow's game can be considered for coach Marijne biggest challenge of his short tenure.

History suggests that any Indo-Pak hockey duel is full of not just excitement and drama but also frayed tempers.

Pakistan might not be the most potent force in world hockey presently but when it comes to playing against India, the intensity touches a new level.

So come tomorrow, the Indians will have to control their emotions when they take the turf. Any lapse in concentration would spoil all the good work they have done so far in the tournament.

Of late, India have dominated arch-foes Pakistan in hockey, the latest being the 6-1 thrashing in a 5th-8th place classification match of the Hero Hockey World League Semi-Final in London in June.

That loss dented Pakistan's hopes of booking a berth at the next year's World Cup to be held in Bhubaneswar and the Pakistanis would be desperate for revenge.

With four world titles and three Asia Cup titles (1982, 1985, 1989), the 14th-ranked Pakistan have been blighted by poor management and security concerns.

But with a new management in place, Pakistan have recalled some experienced players in the squad and this could make things better rather than worse.

For Pakistan it is a big game as a loss can dent their Super 4 chances as Japan is expected to win hands down against Bangladesh in the other Pool A match of the day.