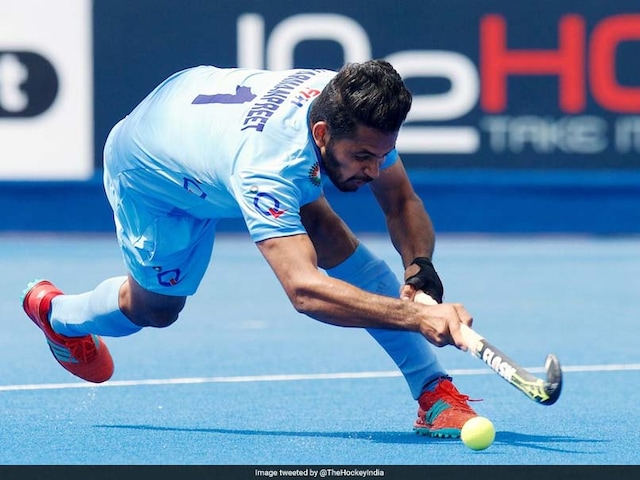 Favourites India produced yet another clinical performance to maul minnows Bangladesh 7-0, registering their second consecutive win at the men's Asia Cup hockey tournament on Friday. India beat Japan 5-1 in the opening encounter. Ranked 6th in the world, Indians were no match for their less-fancied rivals as they controlled the proceedings from start to finish en route their emphatic win. India scored five goals in the first two quarters while another two after the change of ends.

As expected, the Indians were completely in control of the game and displayed superior hockey as compared to the hosts. But one thing which might be a cause of concern for chief coach Sjoerd Marije is India's penalty corner conversion rate. India secured as many as 13 short corners in the entire four quarters but could make use of just two.

The proceedings were completely one-sided. The deadlock could have been broken in the 3rd minute but SV Sunil's shot from a loose ball was saved by home team goalkeeper. But in the seventh minute, Gurjant deflected in a Amit Rohidas pass to give India the lead. Akashdeep then made it 2-0 when he pushed into the net a Sunil pass three minutes later.

Three minutes later, Lalit Upadhyay made it 3-0 in favour of India, when he slotted home after being set by Akashdeep. India earned their first penalty corner in the next minute but Harmanpreet's effort was way off the target.

Rohidas, lurking insde the D, then made it 4-0 when he deflected in Gurjant's cross from the right flank.

The Indians soon got four back-to-back penalty corners but wasted all. Two minutes from half-time, India were awarded a penalty stroke and Harmanpreet stepped up to score his first goal of the day as the Manpreet Singh-led side went into the breather with a comfortable 5-0 lead.

Soon after the resumption of play, India got three more penalty corners but as has been the order of the day, failed to utilise the opportunities as Bangladesh produced a much better account of themselves in the third quarter.

Two minutes into the final quarter, Ramandeep scored with a variation from India's ninth penalty corner to make the scoreline 6-0.

The Indians secured four more penalty corners soon, the third of which was converted by Harmanpreet with a powerful high flick to the top right corner of Bangladesh goal.

The Indians lead Pool A with six points from two wins and will next play arch-rivals Pakistan in their last pool encounter on Sunday.

Meanwhile, in the other match of Pool A, Japan held Pakistan to a 2-2 draw.