Reigning Masters champion Hideki Matsuyama watched his ball hook well right off target. The ball struck a paved cart path, took a high bounce and then nestled its way inside the shirt of a male fan walking on the path. 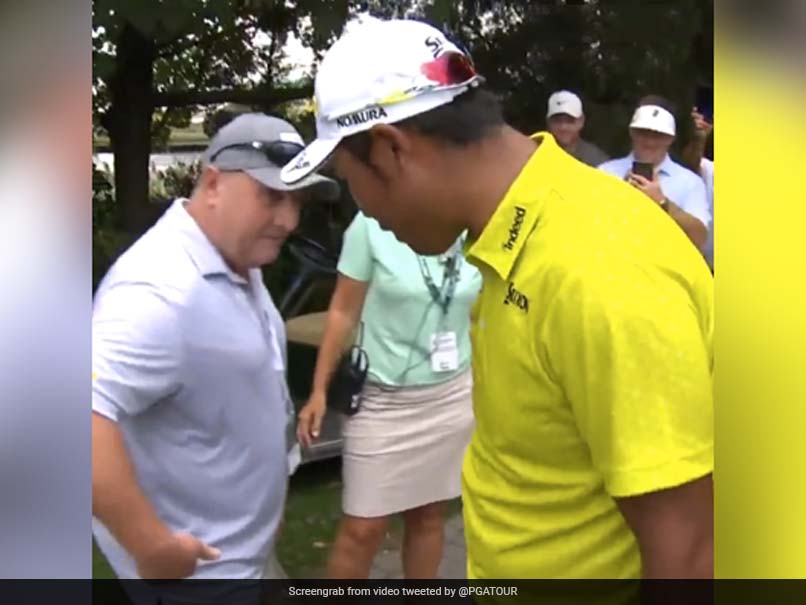 Hideki Matsuyama smiled as he walked up and studied the situation.© PGA Tour/Twitter

Reigning Masters champion Hideki Matsuyama hit an errant tee shot inside a spectator's shirt in Friday's second round of the US PGA Northern Trust tournament in suburban New York. The 29-year-old Japanese star, who won the first major title by any man from his homeland last April at Augusta National, struck the astonishing shot at the 506-yard 10th hole at Liberty National in Jersey City, New Jersey. Matsuyama watched his ball hook well right off target. The ball struck a paved cart path, took a high bounce and then nestled its way inside the shirt of a male fan walking on the path.

The man stopped, not wanting to jostle the ball from where it landed. It wasn't like it was in a pocket. The ball was between the fabric and his body.

A wayward drive into ... a guy's SHIRT?! pic.twitter.com/ggFebWnHT8

"Went between my legs, hit my knee and somehow rolled up into my shirt," the fan said as television cameras captured the unusual moment.

Matsuyama smiled as he walked up and studied the situation, pulling out a tee and putting it by the man's right shoe to mark the spot.

Only then feeling comfortable to move, the fan shifted and the ball fell from its position trapped inside the shirt and rolled into the grass.

Matsuyama signed the ball for the fan but went on to make bogey on the hole, snapping a run of five birdies in a row to finish the front nine.

Matsuyama followed on the back nine with three birdies, another bogey and a closing double bogey -- sending a bunker shot out of bounds to the right -- to fire a three-under par 68 for the round and stand on five-under 137 after 36 holes.

Comments
Topics mentioned in this article
Hideki Matsuyama Golf
Get the latest updates on T20 World Cup, check out the T20 World Cup Schedule and Live Score . Like us on Facebook or follow us on Twitter for more sports updates. You can also download the NDTV Cricket app for Android or iOS.