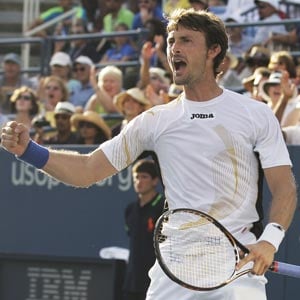 Sergio Garcia has opted to use ex-tennis star Juan Carlos Ferrero rather than his girlfriend as his caddie when he defends his Thailand Golf Championship title next month.

Garcia enjoyed a four-shot win at last year's tournament with his girlfriend, former US college player Katharina Boehm, carrying his clubs at Amata Spring near Bangkok.

But he said Boehm was happy to hand over the bag to Ferrero, his close friend and fellow Spaniard who once topped the tennis rankings and won the 2003 French Open.

"I've played golf with Juan Carlos many times but he never caddied for me before. We just talked about it and he mentioned about it and we decided to do it. He is excited about it," Garcia said in a statement.

"Katharina is fine. She is happy to step aside and support from the sidelines. It always helps to have a friend on your bag. It is good fun to be able to enjoy golf and have a good time with a good close friend."

Comments
Topics mentioned in this article
Golf Juan Carlos Ferrero Tennis Sergio Garcia
Get the latest Cricket news, check out the India cricket schedule, Cricket live score . Like us on Facebook or follow us on Twitter for more sports updates. You can also download the NDTV Cricket app for Android or iOS.