Kapur was challenging for top honours as he finished the front nine in three-under and climbed to 10-under at which point he was just two behind the leader. 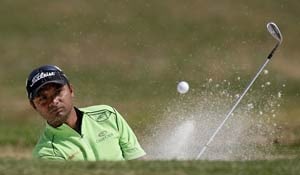 Shiv Kapur blew up a great opportunity of another great finish with a horrific six-over back nine and crashed way down on the leaderboard, while Rahil Gangjee, despite a crippling double bogey on 17th, ended tied eighth at the CIMB Niaga Indonesian Masters, here on Sunday.

Bernd Wiesberger of Austria sealed a dramatic win with a five-under-par 67 to beat a persistent Ernie Els of South Africa by one-shot.

Wiesberger won his second title in Asia courtesy of some exquisite ball striking as he totalled 15-under-par 273.

Kapur was challenging for top honours as he finished the front nine in three-under and climbed to 10-under at which point he was just two behind the leader.

Then came a double bogey on 10th and again another double bogey on 13th to be followed by a bogey-bogey finish for a 75 after a front nine of 33. From being in contention he ended in a tie for 23rd.

Gangjee was even after front nine, but birdies on 10th and 11th, brought him back in the picture for a top-5. Despite a birdie on 16th, the bogey on 13th and a double on 17th dashed his hopes and he had to be satisfied with a eighth place.

Anirban Lahiri had his own woes with a double on seventh and then a bogey-triple bogey finish for a 77 that saw him finish 35th. Ajeetesh Sandhu (76) was tied 67th at the USD 750,000 Asian Tour event at the majestic Royale Jakarta Golf Club.

The towering Wiesberger, whose coach Philippe De Busschere is based in Indonesia, credited his acute iron play for his victory and dedicated the win to his grandfather who passed away a year ago.

"I was struggling in the beginning after my birdie on one. But at the turn I got a bit of momentum going because I was confident with my ball striking," said Wiesberger, who finished seventh last year and went on to win in Korea.

He made the turn in 34 but tightened his grip on the third edition of the CIMB Niaga Indonesian Masters with an eagle three on the 12th hole.

"It was good to hole the eagle and it was nice that Ernie (also eagled the same hole) stayed in touch. He wouldn't let go and that's why he is such a great champion. It was a good time to do that and it got my round going," he smiled.

Els, ranked 24th in the world, was one-over after five holes but put on a battling display with birdies on six and nine followed by an eagle three on 12 which he putted from 30 feet from the fringe. He birdied the last to finish sole second.

"I played and fought hard. I wasn't quite at my best but had a good time. I didn't hit my iron shots close enough especially at the start. I was one over through five holes and had to battle back all the time," said Els.

Kataoka, who has never led in a tournament before, felt nervous on the first tee but managed to pull-off his best performance since turning professional in 2007. His third place result matched his career's best on the Asian Tour at the 2011 Taiwan Masters.

Els, the reigning Open Championship winner, settled for second place after carding 68 while overnight leader Daisuke Kataoka of Japan claimed third place with a round of 70 to finish on 275. Thongchai Jaidee of Thailand was a further three shots back in fourth after registering 69.

Comments
Topics mentioned in this article
Rahil Gangjee Sujjan Singh C Muniyappa Shiv Kapur Anirban Lahiri Golf
Get the latest updates on ICC T20 Worldcup 2022 and CWG 2022 check out the Schedule, Live Score and Medals Tally. Like us on Facebook or follow us on Twitter for more sports updates. You can also download the NDTV Cricket app for Android or iOS.