England's Tom Lewis, who briefly led July's British Open with the lowest ever score by an amateur, clinched a maiden European Tour title on Sunday with a two-shot victory at the Portugal Masters. 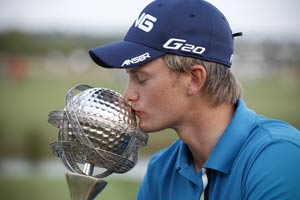 England's Tom Lewis, who briefly led July's British Open with the lowest ever score by an amateur, clinched a maiden European Tour title on Sunday with a two-shot victory at the Portugal Masters.

The 20-year-old hit the headlines at Sandwich in England when his opening 65 gave him a share of the Open lead.

On Sunday, in just his third event as a professional, he converted that potential into silverware thanks to a final round 65 for a 21-under total.

"I wouldn't have expected that at all," said Lewis. "I was dreading Qualifying School at the end of the year but it looks like I've skipped that. I'm just really pleased with my performance."

Lewis' seven under par round at Oceanico Victoria Golf Course allowed him to finish two ahead of Spain's Rafael Cabrera-Bello, the overnight leader.

He started with birdies from five feet at the first and fifth. A two-putt birdie at the par five 12th was followed by a pitch to six feet at the 14th, and he drove the green at the par four 15th.

Two putts gave him another birdie there, but he only required one putt at the 16th from 30 feet.

Lewis reached the 17th green in two and rolled his eagle putt to within a foot, meaning he had birdied five of his last six holes to blow away a world-class field.

After his heroics at the British Open, Lewis was then part of the victorious Great Britain and Ireland Walker Cup side before joining the professional ranks, producing a top-ten finish in his first event in Austria.

Comments
Topics mentioned in this article
Golf Tom Lewis Shiv Kapur
Get the latest updates on IPL 2020, check out the IPL Schedule for 2020 and Indian Premier League (IPL) Cricket live score . Like us on Facebook or follow us on Twitter for more sports updates. You can also download the NDTV Cricket app for Android or iOS.