Shane Lowry's 16-under overall total of 197 is the lowest after 54 holes in British Open history. 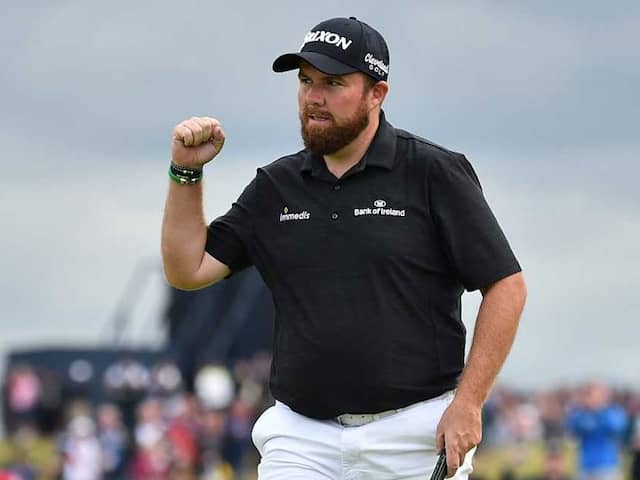 Ireland's Shane Lowry said it had been "the most incredible day" after firing a stunning eight-under-par 63 on Saturday to take a four-shot lead over Tommy Fleetwood into the final round of the 148th British Open at Royal Portrush. The 32-year-old delighted the thousands of fans following him around the course in the first Open to be held in Northern Ireland since 1951, pouring in eight birdies in his bogey-free third round, the best of the championship. His 16-under overall total of 197 is the lowest after 54 holes in British Open history.

Lowry saw a 20-foot putt to tie the major record of 62 on the 18th green slip narrowly past the edge of the hole, but put himself in total control at the top of the leaderboard.

"Honestly, that's the most incredible day I've ever had on the golf course. I honestly can't explain what it was like," he said.

"I know tomorrow is going to be a difficult day. I know there's some bad weather coming in."

He will play with Fleetwood in the final pairing on Sunday at 1247 GMT -- after organisers moved forward the tee times in an attempt to avoid the forecasted bad weather -- after the popular Englishman carded a 66.

J.B. Holmes sits six shots off the lead on 10-under, with world number one Brooks Koepka and Justin Rose one further back.

World number 33 Lowry will be hoping to avoid a repeat of the 2016 US Open, when he blew a four-stroke advantage with a fourth-round 76 as Dustin Johnson took the spoils.

Lowry started the day tied for the lead with Holmes at eight-under, and moved ahead by making three birdies on the front nine.

An incredible recovery shot from deep rough on the par-four 10th set up another birdie, and he produced late fireworks to take total control.

Lowry saved his best until the closing stages, reeling off three consecutive birdies to send the crowd into raptures, before coming agonisingly close to adding another on the last.

Only South African Branden Grace has shot a lower major score, with his third-round 62 at the 2017 British Open.

Lowry is in the perfect position to become the first golfer from either Ireland or Northern Ireland to win a major since Rory McIlroy, who missed Friday's cut, took the 2014 PGA Championship title.

Fleetwood kept his hopes of winning one of the big four tournaments for the first time alive.

The 28-year-old, who finished runner-up to Koepka at last year's US Open, played his 18 holes without dropping a shot, making five birdies.

Holmes at one point reached 11-under overall, but missed a succession of short putts to see his challenge stall, only to drain a long birdie try at 18 to move into third place.

Koepka and Rose now both need either something special or a Lowry collapse to clinch the Claret Jug.

The American struggled with the putter, as he has done all week, for much of the day, before finding his form on the greens late on to keep himself in the conversation with a 67.

"Here you need some wind, you need some rain. You need anything that can kind of go your way," said Koepka, hoping for the inclement weather to blow off the Causeway Coast on Sunday.

England's Rose, who finished tied-second at Carnoustie 12 months ago, threatened to shoot up the leaderboard when he picked up four shots in as many holes on the back nine, but bogeyed the 16th and had to settle for 68.

Lee Westwood surged into a share of the lead with three straight birdies from the second hole, but he made bogey at the 10th when his ball found a rabbit hole and he fell back to eight-under -- eight strokes behind Lowry.

Comments
Topics mentioned in this article
Shane Lowry Tommy Fleetwood Golf
Get the latest Cricket news, check out the India cricket schedule, Cricket live score . Like us on Facebook or follow us on Twitter for more sports updates. You can also download the NDTV Cricket app for Android or iOS.