Tiger Woods will be paired with first-time Augusta National starter Bae Sang-Moon of South Korea and Spanish veteran Miguel Angel Jimenez in the first two rounds of the 76th Masters. 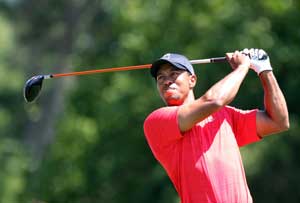 Tiger Woods will be paired with first-time Augusta National starter Bae Sang-Moon of South Korea and Spanish veteran Miguel Angel Jimenez in the first two rounds of the 76th Masters.

The pairings announced Tuesday afternoon by Augusta National did not include American Dustin Johnson, who withdrew because of an unspecified injury, leaving a field of 96 to compete for the green jacket given to every Masters champion.

World No. 7 Woods, a 14-time major champion chasing the all-time major win record of 18 set by Jack Nicklaus, snapped a 2 1/2-year win drought last month at Bay Hill but has not won a major championship since the 2008 US Open.

The Woods group will tee off at 10:35 a.m. on Thursday in the opening round and 1:42 p.m. on Friday in the penultimate pairing for round two.

Defending champion Charl Schwartzel of South Africa will tee off in the trio just before Woods, joining US amateur Kelly Kraft and 2011 PGA Championship winner Keegan Bradley in starting 11 minutes ahead of Woods.

Just behind Woods on the first two days will be another high-profile trio featuring World No. 1 Luke Donald of England in quest of his first major title with American Nick Watney and Italy's Francesco Molinari.

Reigning US Open champion Rory McIlroy of Northern Ireland will be in Thursday's penultimate group at 1:42 p.m., the World No. 2 being joined by past Masters winner Angel Cabrera of Argentina and American Bubba Watson.

World No. 3 Lee Westwood of England, also seeking his first major title, goes off Thursday at 12:58 p.m. alongside former Masters winner Vijay Singh of Fiji and US veteran Jim Furyk.

"The draw doesn't really have that much of an effect," Westwood said. "It's a small field and the course stands up well to the play. So it's fair from start to finish.

"I've always found that it seems a little bit quieter when the tournament rounds start. It's quite quiet out there the first couple of days. You certainly notice it as a player."

Comments
Topics mentioned in this article
Golf Miguel Angel Jimenez Lee Westwood Tiger Woods
Get the latest updates on India vs Australia Series, check out the India vs Australia Schedule for 2020-21 and Ind vs Aus live score . Like us on Facebook or follow us on Twitter for more sports updates. You can also download the NDTV Cricket app for Android or iOS.