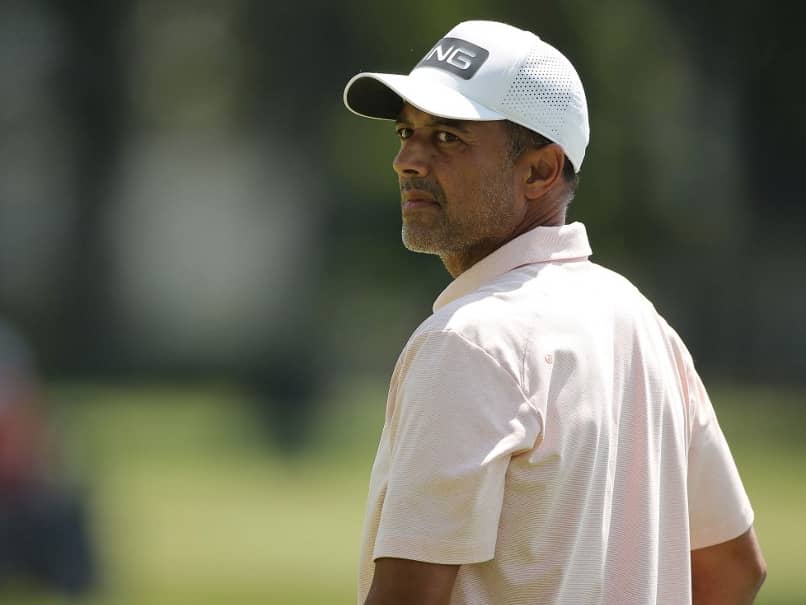 Arjun Atwal could never get going during the final round of the PGA Tour's Rocket Mortgage Classic.© AFP

Form deserted Indian golfer Arjun Atwal in the final round as he returned a one-over 73 to sign off tied 45th at the PGA Tour's Rocket Mortgage Classic. He finished with rounds of 70-69-66-73 for a 10-under 278 overall. Bryson DeChambeau, who had top-10 finishes in the first three events of PGA Tour's ''Return to Golf'', finally claimed the trophy after all the hype about transforming his body and adding 40 pounds to his weight. DeChambeau (65) was on fire both at the start and the close as he birdied four of the first seven holes and closed with three in a row for a career-best 23-under 265 and a three-shot win over Matthew Wolff (71). Kevin Kisner (66) was third.

Atwal could never get going during the final round. Starting at 11-under he had three pars and then a bogey-double bogey on fourth and fifth. He managed a 22-foot birdie on eighth but once again missed a few short putts.

The bright spot was an eagle on 17th after two great shots brought him to five feet. "At least I holed that," he said with a laugh.

He had a chip-in birdie on the first day and an eagle on each of the other three days. A hole-out from 157 yards gave him an eagle on par-four 12th on the second day; a fine approach set up an eagle on par-five seventh on the third day and on Sunday it was at the par-five 17th.

"Still considering the long lay-off I trended well and there were a lot of positives," said Atwal. "Let's see where I go next," he added. It was his third cut in nine starts this season, and the third-round 66 was his best round of the season. The total was the best in relation to par.

DeChambeau's final round of seven-under 65 -- capped by a trio of birdies at the end -- left overnight leader Wolff (71) in second place. DeChambeau, who now has eight top-10s in 10 starts in 2020, has been in top-10 in his last seven starts, five of which were inside top-5.

Tour since Shriners Hospital Open in November 2018. Wolff ended second after starting the day with a three-shot lead. He had five bogeys in his first 10 holes and not even a strong finish could help, though he came as close as one shot to DeChambeau at one stage.

But the eventual winner buried putts on 16-17-18 to remove any doubts. He made a 30-foot birdie putt on the 16th followed by a short putt for birdie on 17th and then smashed a 367-yard drive to set up another comfortable putt at 18th.

"It's a little emotional for me," said DeChambeau. "Because I did do something a little different, I changed my body, I changed my mindset in the game, and was able to accomplish a win while playing a completely different style of golf."

Comments
Topics mentioned in this article
Arjun Atwal Golf Kevin Kisner
Get the latest updates on IPL 2021, IPL Points Table , IPL Schedule 2021 , live score . Like us on Facebook or follow us on Twitter for more sports updates. You can also download the NDTV Cricket app for Android or iOS.