Anirban Lahiri Tied Fourth After Round 1 at Macau Open

Anirban Lahiri, defending champion of the Macau Open, carded five-under 66 to be two shots behind the leader. 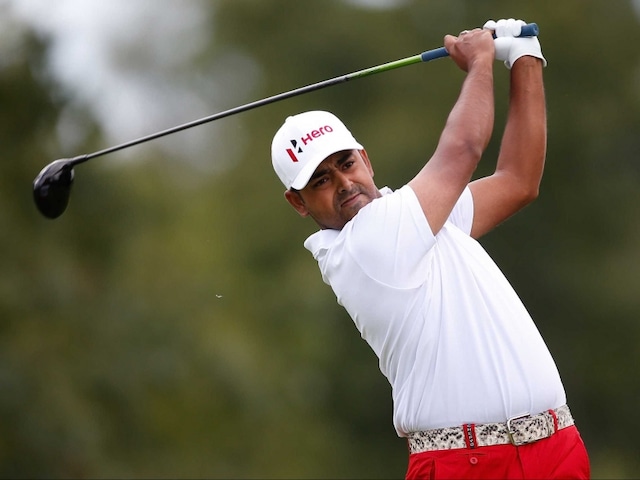 Anirban Lahiri is ranked 39th in the world.© AFP
Macau:

Defending champion Anirban Lahiri got off to a great start at the $1 million Venetian Macau Open as he carded a five-under 66 that placed him tied fourth and two shots behind the leader Thailand's Thitiphun Chuayprakong (64) at the Par-71 Macau Golf and Country Club here. (Anirban Lahiri Aims to Seal Asian Tour No. 1 Title at Macau Open)

In a field that has no less than 17 Indians, Rahil Gangjee, Chiragh Kumar and Abhijit Chadha shot four-under 67 each to be tied eighth, while Gaganjeet Bhullar, Kapil Kumar and Jyoti Randhawa carded two-under 69 each to be tied 25th.

Rashid Khan and SSP Chawrasia scored one-under 70 each to be tied 37th as did Daniel Chopra. Himmat Rai scored even par 71 to be tied 73rd.

Shiv Kapur, Arjun Atwal and S Chikka carded one-over 72 each to be tied 90th and Manav Jaini (74) was 104th. Khalin Joshi and Shubhankar Sharma shot 75 each to be tied 114th and will need a solid second round to stay on for the weekend. Angad Cheema (76) was even further down.

Thitiphun was off to a seven-under 64 start in the first round lead. The 23-year-old Thitiphun, who is seeking a first win on the Asian Tour, stormed home in 29 and his round included eight birdies. Thitiphun needed only 21 putts during the round.

Young Korean Jeunghun Wang and Bangladeshi Siddikur Rahman shot 65s to trail by one while Lahiri and 2013 champion Scott Hend of Australia were amongst those bunched on 66.

Following his Presidents Cup debut where he was disappointed to not deliver a point for the Internationals, Lahiri bounced back in style with a five-birdie round to be two back of the leader.

"It's back to the usual I guess," said the current Asian Tour Order of Merit leader. "I think it was a solid round of golf. I misread a few. Hopefully I can make those six or eight footers through the rest of the week."

Lahiri said, "Honestly, I can't complain. Hit a good putt on six, seven, nine, 11 and 12. Very good putt on 15 but that didn't drop. If I had dropped two or three of those, I won't have felt too terrible. I'm not feeling bad. I'm happy with how I hit it. Hopefully I can make those six or eight footers through the rest of the week."

Lahiri added, "I hit it well tee to green and missed about three or four fairways. It was hard. I got away with a couple of pars on those holes, otherwise I stayed pretty solid. I played pretty good today. Having played here a few years, I kind of got my strategies down.

"I've taken out as much stress out of my shots as possible. It's a bit like Delhi Golf Club. This course gets a bit tight when it gets windy. You have to really know where to hit it. Having played here a few times, you get more comfortable. And obviously when you win you come back to the course and you feel great."

Talking of Presidents Cup, he said, "Last week was a lot of fun. We don't do enough of that stuff but it's good to be back here and good to be enjoying my golf. It's a different mindset. Your strategies are different.

"When you have a partner, sometimes you're forced to play aggressively when you might not be comfortable playing that way. That's one of the major changes for me. I made my decisions without thinking I have to do something or not. In that sense, it's back to the usual I guess."

Thai ace Kiradech Aphibarnrat, who broke into the world's top-50 for the first time in his career this week, battled to a 68 while countryman Thongchai Jaidee, who along with Lahiri had featured in the Presidents Cup last week, carded a 71. South African Ernie Els carded a disappointing 74.