Anirban Lahiri was sole third at 11-under and four shots behind Justin Rose (64) and Lucas Bjerregaard (63), who were at 15-under. Jeev Milkha Singh moved to 10-under in tied fourth alongside Mathew Fitzpatrick (66). 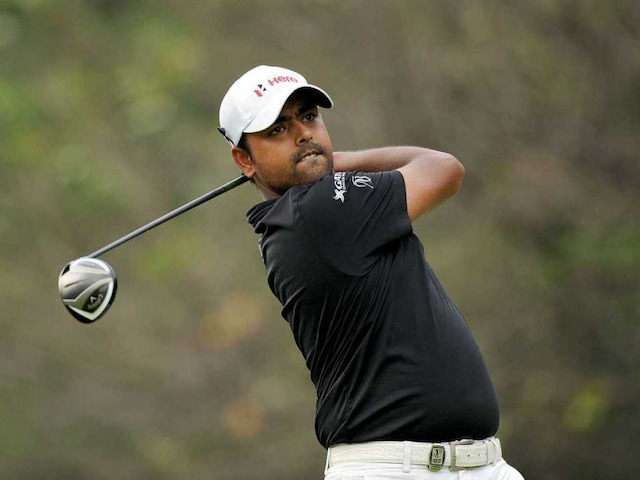 Anirban Lahiri, who was even par for the front nine, had five birdies on the return journey.© NDTV
Hong Kong:

It was a good day for the Indian golfers as both Anirban Lahiri and Jeev Milkha Singh struck a purple patch on the back nine and moved into contention at the UBS Hong Kong Open here on Saturday. (Click here for latest Golf stories)

Lahiri was sole third at 11-under and four shots behind Justin Rose (64) and Lucas Bjerregaard (63), who were at 15-under. Jeev moved to 10-under in tied fourth alongside Mathew Fitzpatrick (66).

Lahiri, who was even par for the front nine, had five birdies on the return journey, while Jeev, who was one-over on front nine racked up six birdies as both finished at five-under 65.

Other Indians in the fray -- Gaganjeet Bhullar moved into his best position for more than a year as he shot 67 and was eight-under in tied ninth place, SSP Chawrasia (71) was tied 35th and Jyoti Randhawa (68) was tied 44th.

Lahiri, winner of Malaysian Open and Hero Indian Open this season, said, "I was not very focused on the front nine. But I calmed down a little bit and by the eighth, ninth hole, I started hitting it a little more solid. It was good to get birdies on 10 and 11 as they got me into the right zone mentally. I was just focusing on giving myself opportunities, and it was good.

"You want to get as close as possible, because if it gets into a match-play position, then they can play totally differently and separate themselves from the field. But hopefully I can play some good golf, play 18 holes tomorrow like I did on the back nine and maybe have a sniff.

"It is a great spot to be in. Also it is good to be playing well in second half of season as there are a lot of World ranking points. Hopefully I can make a move," he added.

Jeev also switched gears on his back-nine after struggling with an outward 35.

The Asian Tour honourary member fired three successive birdies from 10 before going on to pick up three more birdies in his last four holes.

"Honestly it was a shaky start but got my bearings right after I made two birdies. But what got me going was on the 10th hole, I got very lucky. It jumped over the water and stayed up. I chipped it to about two feet and birdied it.

"I'm in better shape and I'm working a lot on my mental side. I think everything should fall in place and I'm ready to see what comes my way," said Jeev.

England's Justin Rose and Denmark's Lucas Bjerregaard shared the third round lead after an enthralling day which saw the duo returned with matching three-day total of 15-under-par 195 at the UBS Hong Kong Open today.

Overnight leader Rose, who held a one shot lead over Bjerregaard coming into the weekend, marked his card with two eagles and two birdies for a commanding 64 which edged him closer to his first UBS Hong Kong Open title.

After opening with two straight pars, Rose found the green with his second shot on the third hole. The Major winner made it look all too easy when he drained home a monstrous eagle putt to get to 11-under.

Rose then birdied 10 and showed his masterclass once again on 13 by nailing another eagle putt before following that up with another birdie on 14.

Comments
Topics mentioned in this article
Anirban Lahiri Jeev Milkha Singh Golf
Get the latest Cricket news, check out the India cricket schedule, Cricket live score . Like us on Facebook or follow us on Twitter for more sports updates. You can also download the NDTV Cricket app for Android or iOS.