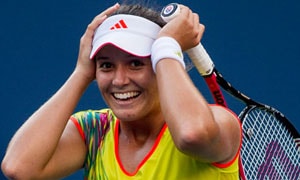 The 18-year-old world No.74, who made it through to the last 16 at the US Open earlier this month with wins over Li Na and Kim Clijsters, needed more than three hours to defeat her Chinese opponent, ranked 27 places above her.

To reach the last eight Robson had defeated the second seed, Zheng Jie of China 6-3, 6-3. She next plays third-seeded Sorana Cirstea, the world No.30 for a place in the final. The Romanian beat Alize Cornet of France 6-4, 6-3.

The second semi-final will be between Ursula Radwanska of Poland and Hsieh Su-wei of Taiwan.

Robson is the first British woman to reach a main tour singles semi-final since Anne Keothavong at the Luxembourg Open in October 2011.

Comments
Topics mentioned in this article
Tennis Laura Robson French Open 2011 Francesca Schiavone Sania Mirza Shuai Peng Marion Bartoli
Get the latest Cricket news, check out the India cricket schedule, Cricket live score . Like us on Facebook or follow us on Twitter for more sports updates. You can also download the NDTV Cricket app for Android or iOS.