Nadal will take a 19-4 career record over Ferrer into the final with 16 of those wins coming on clay. Ferrer's only win over Nadal on the surface was back in 2004 at Stuttgart, the pair's first meeting when the seven-time French Open champion was just 16. 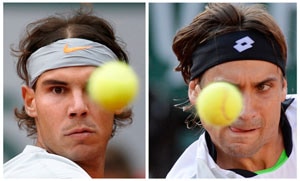 Rafael Nadal insisted video games rival and close friend David Ferrer deserves his chance at a Grand Slam title and anybody who claims otherwise is ignorant of the sport.

Nadal will become the first man in history to win the same major eight times if he beats his Spanish compatriot in Sunday's final at Roland Garros.

With a Paris record of 58 wins from 59 matches, Nadal, in his 17th Grand Slam final is the overwhelming favourite but has backed his 31-year-old rival to shine after making his first final at the 42nd time of asking.

"Tennis is a fair sport, and if somebody deserves to win titles, to be in the finals of a Grand Slam, is David," said Nadal.

"Somebody deserves to be in the final of a Grand Slam it is David. His level of tennis is higher every year. He's always playing at a very high level and very often."

Nadal will take a 19-4 career record over Ferrer into the final with 16 of those wins coming on clay.

Ferrer's only win over Nadal on the surface was back in 2004 at Stuttgart, the pair's first meeting when the seven-time French Open champion was just 16.

Nadal has also won all three of their meetings in 2013, part of his 42-winning record out of 44 matches since his return to the tour in February after seven months on the sidelines.

Despite his overwhelming dominance, the 27-year-old Nadal believes that Ferrer, who has the lowest profile of the world's top five men, does not get the respect he deserves.

"The person who will not respect David as one of the greatest players of the world -- and not for one year, for a long time -- is because that person doesn't know nothing about tennis. That's the real thing," said Nadal.

Ferrer has backed up his Paris threat by not dropping a set and spending six hours fewer than Nadal on the court.

While Nadal needed the best part of five hours to beat world number one Novak Djokovic in his semi-final, Ferrer swatted the challenge of home star Jo-Wilfried Tsonga in straight sets.

"Sorry, but when I read a few things about the semi-finals, Tsonga against David, seems like Tsonga gonna have a good semifinals. I never felt that way. When you play against David best of five on clay, it's a very, very tough match."

Nadal and Ferrer have been friends and Davis Cup teammates since 2004 and often spend their free-time teaming up as video game partners.

"He's a very good guy. He's relaxed. He's very big fighter. He always worked a lot to be where he is, and I like this kind these kind of persons," said the champion.

"He's humble and he's a normal guy -- that's the most important thing, more than a tennis player, be good person."