Third seed Victoria Azarenka came from a set down to beat France's Alize Cornet 4-6, 6-3, 6-1 to reach the French Open fourth round on Saturday. 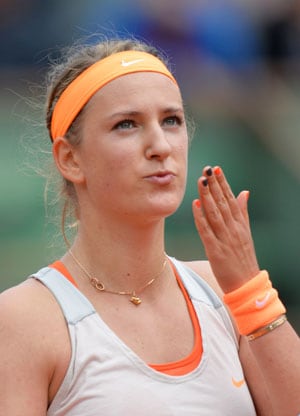 The 23-year-old Australian Open champion reeled off the last six games of the match and goes on to face either French 13th seed Marion Bartoli or Italy's 2010 champion Francesca Schiavone for a quarter-final spot.

"Alize is a terrific girl. It was a difficult match and she played really well, but playing on the centre court really motivates me," said Azarenka.

In a match which featured 15 breaks of serve, it was the 23-year-old Frenchwoman, fresh from a third career title in Strasbourg on the eve of Roland Garros, who took the first set, courtesy of a big forehand off a second serve.

Cornet took a tumble in the opening game of the second set and grimaced in pain again, feeling her upper right thigh in the eighth game as Azarenka went on to level the tie.

By that stage, Azarenka, who has never got beyond the quarter-finals in Paris, had already sent down 23 unforced errors and eight double faults.

Cornet was ahead 1-0 with a break in the decider before Azarenka pulled away, winning six games on the bounce to take victory after 2hr 22min.