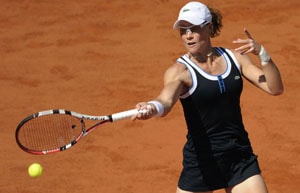 Samantha Stosur, the 2010 French Open runner-up, waited 2 and a half hours to play because of rain, then quickly won her opening match at Roland Garros.

The match was delayed at the start on a 55-degree afternoon, and when the rain finally stopped, Stosur was ready. Playing on cozy Court 1, nicknamed the bullring, Stosur dominated with her strong serve and pinpoint groundstrokes, repeatedly skipping shots just inside the lines.

Stosur's best showing at Roland Garros was three years ago, when she lost in the final to Francesca Schiavone. She won the U.S. Open in 2011, but this year has been hampered by a right calf injury and has yet to reach a semifinal.