Rafael Nadal pulls out of Wimbledon warm-up at Halle

The seven-time French Open champion Nadal says he is focussed on the final against countryman David Ferrer and he will not be best prepared for the Halle ATP. 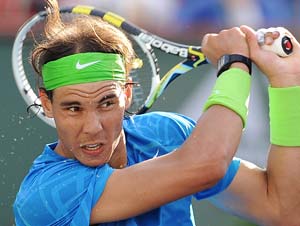 Rafael Nadal pulled out of next week's Wimbledon grasscourt warm-up event at Halle on Saturday, the day before he takes on Spanish compatriot David Ferrer for a record eighth French Open title.

"The last few months have been very difficult as have the first few rounds at Roland Garros. I face David Ferrer tomorrow and cannot prepare the best for Halle," said Nadal.

The Spaniard added in Paris on Saturday: "I think today is not the day to talk about Halle. I am here playing a final of Roland Garros tomorrow (Sunday). It's enough important.

"I respect every tournament. Halle is important tournament for me."

Nadal had played in Halle in 2012, losing in the quarter-finals to Germany's Philipp Kohlschreiber.

"It's a shame and regrettable that Rafael is not coming," said Halle tournament director Ralf Webber.

"I understand his decision and know that it was difficult for him to make it. But the health of a player remains paramount."

Roger Federer will be the top seed at the event which starts on Monday.