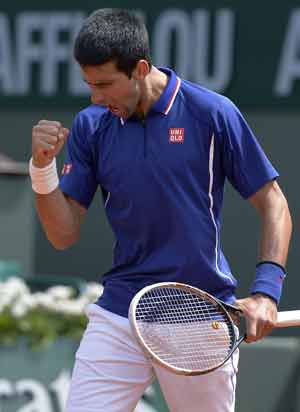 After losing a set for the first time in the tournament, Djokovic became more aggressive, punctuating winners with lots of fist-pumping as he pulled away.

He repeatedly escaped trouble with his serve, erasing 11 of the 13 break points he faced.

Djokovic will next play 35-year-old Tommy Haas, who became the oldest French Open men's quarterfinalist since 1971 by beating Mikhail Youzhny 6-1, 6-1, 6-3. Haas also became the oldest man to reach the quarters at any major event since Andre Agassi at the 2005 U.S. Open.

Roland Garros is the only Grand Slam that Djokovic has yet to win.