No Greta Garbo as Serena yet to peak

The evidence suggests that as long as she remains fit and motivated into her third decade on the tour, the likes of Sharapova and world number three Victoria Azarenka, the only two who can match the American for power, will continue to have their work cut out. 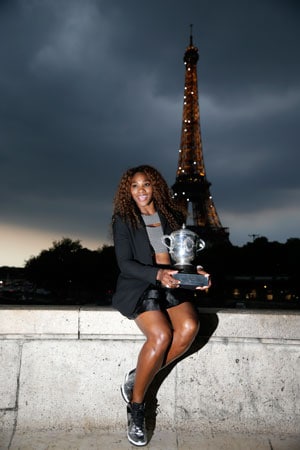 Serena Williams warned her punchdrunk rivals that she is still to realise her potential and that retirement is not on her agenda as she targets adding to her 16 Grand Slam titles.

The 31-year-old American world number one defeated defending champion Maria Sharapova 6-4, 6-4 to capture her second Roland Garros on Saturday, 11 years after her first.

But if her flagging rivals on the tour were desperately hoping that Williams was contemplating quitting, then she told them to think again.

Was she pondering following the example of Greta Garbo, another American diva of a different age and culture who quit Hollywood at the age of 35, at the peak of her powers?

"Wow, what an analogy, me and Greta Garbo. I definitely want to go out in my peak. That's my goal. But have I peaked yet?," Williams teased her audience.

The evidence suggests that as long as she remains fit and motivated into her third decade on the tour, the likes of Sharapova and world number three Victoria Azarenka, the only two who can match the American for power, will continue to have their work cut out.

"I'm really relaxed. I really enjoy every moment that I'm out there. I always said that I felt like I have never played my best tennis," added Williams, the oldest winner in Paris in the Open era.

"I have said that for years, that I feel like I can always do better and play better and I have always wanted to reach that level. Maybe I'm just trying to get there."

She is now just two majors behind the 18 won by Chris Evert and Martina Navratilova and four back from the 22 racked up by Steffi Graf.

The record 24 won by Margaret Court may be out of the question.

"I really believe age is a number at this point, because I have never felt so fit. I feel great. I look great," she said.

The statistics back up Williams' confidence concerning her future prospects.

Since her shock first round defeat to Virginie Razzano in Paris last year, she has won 74 of 77 matches on tour with further titles in 2012 at Wimbledon, the Olympics and the US Open.

In 2013, she has won 43 out of 45 matches, sweeping to victory in Brisbane, Miami, Charleston, Madrid, Rome and now in Paris.

"I'm just trying to go up and up. Today when I won I was trying to win the French Open. I wasn't trying to get to No. 16 (Grand Slam titles). I think it's really special.

"I feel like I definitely want to continue my journey to get a few more."

Her coach, Frenchman Patrick Mouratoglou, has no doubt whatsoever that Williams will continue to add to her Grand Slam collection.

"When she is in that kind of spirit, there is no-one who can stop her," he said.

"People always speak about her strength and power but she knows how to do a lot more things on the court. She is an exceptionally complete champion."

He also backed her to chase down the 18 majors of Evert and Navratilova, starting at Wimbledon later this month where she has already triumphed five times.

"I think she is going to go looking for them. If she keeps this mentality, then the appetite will be there. When she is winning, you don't want to see her stop.

"Only if her motivation drops can I see her stopping. At this moment, she is in her best tennis and physical shape."