Her French coach Patrick Mouratoglou described her efforts as those of an "immense champion" and that last year's shattering loss had created a new-look Serena Williams. 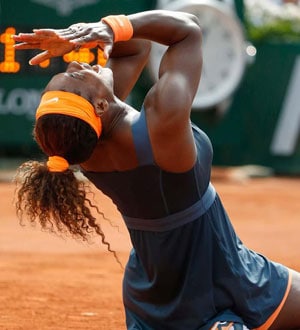 Serena Williams admitted that her first round humiliation at the 2012 French Open helped inspire her to victory in Saturday's final, her second Paris title coming 11 years after her first.

The 31-year-old American became the oldest women's winner at Roland Garros in the Open era with her 6-4, 6-4 victory over defending champion Maria Sharapova.

It gave her a 16th Grand Slam singles title and took her record to 74 wins in 77 matches since she suffered her worst loss at a major 12 months ago when Virginie Razzano dumped her out of the first round in Paris.

Since then she has captured the Wimbledon, Olympics and US Open titles while adding Saturday's French Open to trophies in Brisbane, Miami, Charleston, Madrid and Rome in 2013.

Since the turn of the year, the American has won 43 matches and lost only two.

"But this time I was just more relaxed going in. I played so well leading up to the French Open last year and the same thing happened again this year but I didn't put any pressure on myself.

"I think losing in the first round definitely helped me realise I have no points to defend. I have nothing to lose. I can just kind of relax and just do what I want to do here."

Her French coach Patrick Mouratoglou described her efforts as those of an "immense champion" and that last year's shattering loss had created a new-look Serena Williams.

"When she is in that kind of spirit, there is no-one who can stop her," said Mouratoglou.

"Last year was a real shock for her. But she has undergone the reconstruction work which has made her become perhaps even stronger than she has ever been."

Williams agreed that last year's setback caused her to dig deep into her physical and mental resources, but she said she never doubted that she would win another French Open.

"I've always said a champion isn't about how much they win but it's about how they recover from their downs, whether it's an injury or whether it's a loss," she explained.

"And I think that really creates a real champion, is how they can recover from those moments."

Saturday's win came courtesy of pinpoint groundstroke accuracy as well as raw power -- in the final game of the match, Williams hit three aces and blasted 10 in total past Sharapova.

Three were timed at over 190mph.

"I'm a lot smaller than Maria, so I don't know how I'm able to serve so big. I think growing up with (sister) Venus, you know, she's serving so big, I was like, I want to serve big, too," said Williams, who employed her weaponry to its fullest force in the last game.

"At that point I was just so nervous. I thought, I'm not going to be able to hit groundstrokes. No joke. The one groundstroke I did hit went like 100 feet out.

"I thought to myself, Look, Serena, you've just got to hit aces. That's your only choice."

Sharapova was in no mood to disagree.

"At 5-4, she's serving harder than David Ferrer when he gets to the final of Roland Garros, you know what I mean?"