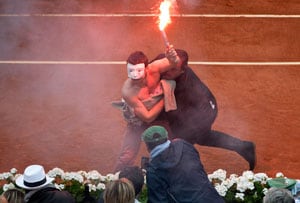 The French Open men's final was held up by a flare-carrying protestor on Sunday, who came within just a few feet of defending champion Rafael Nadal.

The match between Nadal and David Ferrer was in the second set when a shirtless spectator, wearing a white mask, leapt from the stands and onto the court before he was wrestled away by security officials.

The match was briefly halted with Nadal even taking the time to shake the hand of the security guard who had sprinted into the playing arena to protect him.

Shortly beforehand, two protestors were expelled from the stadium after holding up play by brandishing a banner with a slogan on it protesting France's new same sex marriage law that was voted into law last month amid widespread opposition.

An AFP journalist later saw four people, all aged around 20 years, being led away from the stadium by security agents.

"We are protesting against the Taubira law (authorising same-sex marriages) because we fear for the future of our children," one of the four shouted out.

The incident was similar to one that involved Roger Federer in his victorious 2009 final at Roland Garros against Robin Soderling.

On that occasion a serial sports event interferer known as Jimmy Jump leapt onto the court and ran up to Federer attempting to place a barretina hat on his head.

He was tackled by a security guard while stumbling after he jumped over the net and taken into custody.